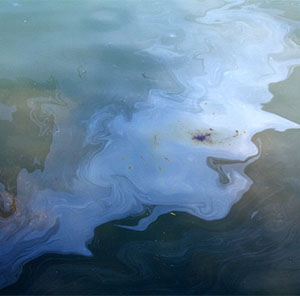 Water Contaminated by an Oil Spill

Flash Forward Friday is a feature of the UCF Technology Transfer blog, “Patent Trending,” where we theorize a future where a specific UCF technology has been commercialized and is changing the way our future selves live, work, and play. The purpose of this blog series is to illustrate the potential of not-yet-commercialized technology and encourage excitement about the possibilities.

In 1989, the Exxon Valdez spilled more than ten million gallons of oil into the Prince William Sound in what’s considered to be one of the most devastating human-caused environmental disasters.

In 2010, British Petroleum (BP) spilled 4.9 million barrels of crude oil into the Gulf of Mexico.

Typical cleanup efforts in the wake of an oil spill include:

Do you see where we’re going with this one?

Flash forward to 2020. An oil tanker runs aground and spills millions of gallons of fuel that threatens to ruin a beautiful reef nearby. In the years before researchers invented a way to functionalize fly ash to clean up oil spills and recover the oil as usable fuel, a spill like this would have dominated the front page of every newspaper and the feeds of every 24-hour television news network. But in 2020, the spill is handled quickly and effectively by companies that produce the patented functionalized fly ash, only making page 16, but making billions of dollars for those who capitalized on the solution to two eco-problems of the past.

Several years earlier, scientists at UCF put their heads together to think of a practical solution for oil spill clean-up efforts. The world at large needed better materials to soak up oil, removing it from water and coast lines. In 2020, these accidents are readily treated, using a transformed waste product, to remove oil from delicate oceanic and coastal ecosystems and reuse it as fuel. 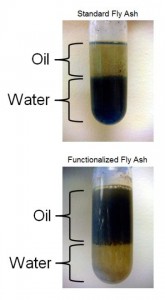 Because standard fly ash is hydrophilic (water-loving), its ability to soak up oil is hampered by the water it soaks up first and more easily. In contrast, the functionalized fly ash has a hydrophobic (water-repelling) nature that allows it to absorb oil more readily than water.

In the time before functionalized fly ash became the de rigueur solution, materials typically considered for oil spill cleanup included natural materials like straw, clay and volcanic ash (materials with a good capacity for soaking up oil, but not much compatibility with water) and synthetic materials like polypropylene and rubbers (materials compatible with water, but expensive).

Meanwhile, fly ash, a residue generated when burning coal for fuel, was considered waste material with little productive usage, especially in developing countries. Millions of tons were dumped in landfills yearly. In 2008, in the United States alone, about 131 million tons of fly ash were produced annually by 460 coal-fired power plants.

When this now-valuable fly ash was considered a waste material, it was often stored in wet ponds that minimized dust. The ash would leach toxic metals over time like lead and arsenic, contaminating groundwater. While fly ash containments were typically stable, accidental breaches were rapid and on a massive scale, causing problems similar to oil spills.

While regular old Joe-Schmoe fly ash is a poor oil sorbent with its low porosity and hydrophilic nature—having the same effect as trying to clean up orange juice with a wet paper towel instead of a dry one, where the capacity to soak up a mess is impeded by what it’s already absorbed—the two-step approach developed by the game-changing researchers at UCF increases the surface area of fly ash particles and functionalizes the surface to create a porous hydrophobic material.

Changing the environmental consequences of future oil spills from a front-page crisis into no-big-deal, we’ve-got-it-handled news on page 16 relies on the commercialization of technology like this. Without the investment of companies willing to plan ahead and prevent environmental catastrophes caused by oil spills, we’ll look back in 2020 with 20/20 hindsight that someone should have acted in 2014.

For more information on partnering with UCF to bring this technology to market, contact Andrea Adkins.