For many people, walking is a simple, natural process of placing one foot in front of the other to propel themselves forward. However, for those who depend on prosthetic devices, propulsion is not always a simple process. That is one reason why Hwan Choi, Ph.D., chose to lead the Rehabilitation Engineering and Assistive Device Lab (REAL) at UCF. “My work focuses on helping people with amputations or who are neurologically impaired,” Choi said. The REAL is part of the UCF Biionix (Prosthetic Interfaces) Cluster. 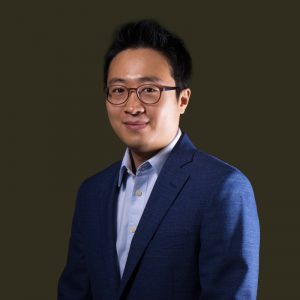 “I’ve always been interested in the human body, especially the musculoskeletal system,” Choi said. But as an engineering student, he wasn’t sure how to apply that interest until he attended a seminar during his fourth year at Korea University. “Then it hit me. So, during my master’s program, I began researching how surgeries and different surgical methods affect amputees. I studied ankle-foot orthosis and its impact on the skeletal system for children with cerebral palsy and individuals with stroke.”

Choi joined UCF’s Biomedical Engineering faculty three years ago after completing his post-doctoral fellowship at the University of Michigan. His latest research has resulted in two inventions: a timing module to improve the performance of existing prostheses and a variable stiffness ankle-foot prosthesis inspired by the mantis “punching” shrimp. Choi is also developing a mask in response to the COVID-19 pandemic. “This is just a small project of our lab, since our research really doesn’t focus on respiratory diseases and COVID-19 issues,” said Choi. “But I wanted to contribute to society by helping resolve issues with wearing a mask in daily living.”

Improving the timing and propulsion of existing prostheses

One technology that Choi is developing is a timing device that maximizes the propulsion efficiency of passive prostheses used by people with transtibial (below-knee) amputations. Usually made of carbon fiber, passive prostheses are less costly than active, fully motorized prosthetic devices, but they limit a user’s ability to walk efficiently. “When a person uses a passive prosthesis, their body weight, along with gravity, causes the carbon fiber foot to deform and store energy,” Choi said. “But the problem is, these passive prostheses don’t provide the energy at the right moment,” he said. “The energy return happens so early that it only contributes to supporting the body upward—not forward.

The gastrocnemius muscle and Achilles tendon work together to propel the body forward.

“I wanted to solve these timing and propulsion issues and make the solution more applicable for people who already own a prosthesis,” he said. During his research, Choi found that most people would rather keep their passive prosthesis and not bother with the expense and time needed to adjust to a new one.

So, he designed a lightweight timing module that easily integrates with existing passive prostheses to control and release stored energy at appropriate times.  “That way, people use less musculature, require less effort, and move more comfortably,” he said.

According to Choi, the device replicates the functions of the gastrocnemius muscle in a person’s calf. The muscle optimizes the timing needed to release energy from the Achilles tendon, which acts like a spring, storing and releasing energy. A person uses both the muscle and tendon to push off when walking or running.

“With a prosthesis, the timing module acts as the gastrocnemius muscle, and the carbon fiber foot acts like the Achilles tendon,” Choi said. 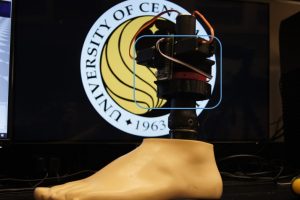 Example of the new prosthetic timing module (in the blue box) attached to a passive prosthesis.

“Without this timing device, the energy would remain on the passive prosthesis. There’s usually no component that controls the energy return, so when people actually need to push off, there’s not much energy left on the prosthesis,” he said. As a result, people must recruit other muscles to create a similar walking pattern.

Choi and his team have developed a prototype and will soon be testing the device. For more information about the invention, read the technology sheet.

Inspiration from the punching shrimp

Another technology that Choi and his team have developed is a variable stiffness ankle-foot prosthesis. The inspiration for the unique design comes from the little mantis shrimp, also known as the “punching shrimp.” Choi got his inspiration for the invention while watching documentaries with his two daughters. 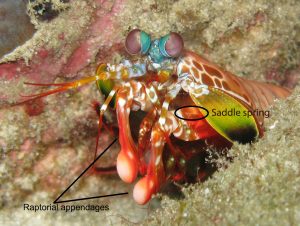 “The shrimp has a unique mechanism, which is the saddle spring,” Choi said. Like a stackable potato chip, the saddle spring has different curvatures which connect to the animal’s club-like arms called raptorial appendages. The mechanism allows the shrimp to store and release enough energy to punch and smash open larger, hard-shelled prey (such as mollusks and crabs). The action also causes water in the strike zone to boil briefly.

“When I saw that, I wondered how we could implement this high-energy return mechanism in a prosthesis,” he said. As a person walks, their ankle (which acts like a spring) stretches from less than 10 degrees to a maximum of 15 degrees, Choi said. “With that small deformation, we wanted to be able to store energy greater than a regular passive prosthesis and to vary the stiffness to account for different walking conditions,” Choi said.

Based on that, Choi and his team designed a core with sides of different curvatures. “That way, as this rotates, it provides different bending stiffnesses for the prosthesis.”

The technology employs a small, lightweight, low-power motor to rotate the core and vary the stiffness, as needed. “The benefit of this design is it can have a rigid foot, and the core can store all the energy,” Choi said. He noted that other designs that use a mechanical spring enable variable stiffness, too, but those designs cause the prosthesis to be heavy and bulky. “We expect our design to have a high energy return with a small ankle deformation,” he said. For more information about the invention, read the technology sheet.

Choi’s concept for a rollable mask came from his own experience with having to wear a face mask at work and public places like shopping centers. “As we all know, it’s really important to wear a mask to prevent the spread of disease, but the problem is, I’m the kind of person who forgets my mask a lot,” Choi said. “Sometimes I forget, and I have to go back to my car or back to my house to grab my mask.

“I look at my daughters, too. Even though my wife and I tell them not to touch the masks, they’re always touching the masks, and they want to take them off. “That’s how I came up with the necklace idea, so we can immediately deploy the mask when we need to. It is the easiest way to carry a mask, and you can wear it all day.” Choi added that the mask would save on washing time and reduce the use of disposable masks.

The design consists of a short necklace or neckband with a replaceable mask cartridge. A ratchet and pall system allows the mask to be rolled up or down, as needed. Bendable or elastic string ear hooks on the mask enable the user to adjust the fit over the nose and under the chin. Battery-powered ultraviolet light panels in the necklace safely sterilize the mask when it’s not in use. “We’re planning to include a rechargeable battery so that people can recharge it when they get home,” Choi said. He is currently seeking feedback from colleagues and experts. For more information about the invention, read the technology sheet.

You can learn more about Choi’s research at the Rehabilitation Engineering and Assistive Device Lab (REAL).