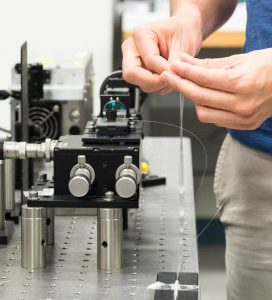 On March 16-18, CREOL, The College of Optics and Photonics will host the 2017 Industrial Affiliates Symposium: Advances in Optics and Photonics. Activities will include short courses, industrial affiliates’ exhibits, technical exhibits, a poster session, lab tours, a reception, technical talks by CREOL faculty and presentations by invited distinguished speakers. (More information is available at http://www.creol.ucf.edu/Partnerships/Affiliates/2017Symposium/.) The following article highlights the work one of CREOL’s leaders in optical fiber research, Rodrigo Amezcua Correa, Ph.D.

As the director of the Microstructured Fibers and Devices research group at UCF’s College of Optics and Photonics, Rodrigo Amezcua Correa, Ph.D. leads a team that specializes in designing and fabricating optical fibers and different components that are made of optical fibers—hair-thin (or smaller) glass rods and devices that enable lasers to precision-cut slabs of steel or something as delicate as the glass covers of smartphones.

Since joining CREOL (the Center for Research and Education in Optics and Lasers) 6 years ago, Amezcua has collaborated on several inventions, one being a new class of fiber optic sensors that are ideal for use in harsh environments. The technology, which has been licensed for commercialization by Multicore Photonics, can be used to sense temperature, pressure, strain, acoustic vibration, mechanical vibration or a combination of sensing applications. For more information about the invention, see the technology sheet.

Amezcua has also been working with CREOL researchers Lawrence Shah, Ph.D., Jose Antonio-Lopez, and Joshua Bradford to vastly increase a high-power laser’s output with an unprecedented degree of intensity and phase control. According to Amezcua, one of the major problems associated with using high-power lasers, such as those used for precision cutting and welding, is the ability to boost a beam’s power and still control its shape and output.  “When you want to use a high-power laser, the output of the laser changes spatially—it goes from one mode to another one very rapidly. The shape of the beam at the output jumps between one shape to another one, and we call those shapes ‘modes.’

One design that they have developed incorporates a new device that can control the spatial distribution of the light that propagates through an optical fiber, which Amezcua said is very unique. “It (the device) is made up of multiple optical fibers, so you can put a lot of power through them, and by controlling the phases of the different fiber inputs, you can control the shape—how it looks transversally in the spatial domain—by making small modifications to the light that you launch into the fiber.”

Essentially, the device connects single-mode laser fibers (each transmitting a single light wave) to one large, multi-mode fiber. Beam combining is a common technology, but it’s not easy to control the shape of the output of a big fiber. “With the new device that we’ve developed, you can electronically control the input signal, and by doing that, you can control what you get at the output of the laser, and potentially overcome these limitations that the fiber laser community is facing now,” Amezcua said. “That allows you to change the beam very rapidly, to change the spatial profile.” So you get a faster, more powerful laser with more control.

For their part, Amezcua and his research group actually designed all of the optical fiber components, including a unique photonic lantern. The photonic lantern, made entirely of glass, connects several fiber lasers and allows users (manufacturers) to control the output optical field in intensity and phase. Though photonic lanterns have been used in astronomy and telecommunications, this is the first time that they’ve been designed for high-power, solid state lasers.

Before joining the CREOL faculty, Amezcua worked at Powerlase Photonics in London, fabricating high-power diode pumped solid-state lasers. Originally from Mexico City, he became interested in fiber optics research as an undergraduate. “There were a few professors that worked in the fiber optics field, and I got excited with the research that they were doing for telecommunications and fiber sensors,” he said. “So I did a research internship in that field, and then I went to Southampton where there is a lot of expertise in fiber optics.”

While at the Optoelectronics Research Centre (ORC) at the University of Southampton, Amezcua obtained his doctorate in photonics. He then continued as a post-doctoral researcher at the University of Bath, where he developed novel methods of fabricating photonic crystal fibers with significantly improved optical properties.

In 2011, Amezcua left the United Kingdom to help start the Fiber Optics program at UCF. “It was a unique opportunity to build a new fiber fabrication facility and fiber optics research group,” said Amezcua. “We were starting from scratch, pretty much—we didn’t have anything. It was just me and Axel [Professor Axel Schülzgen].”

Amezcua brought his extensive experience in designing and fabricating photonic crystal fibers for fiber lasers, supercontinuum generation, nonlinear microscopy and sensing devices. With his help, CREOL and the Townes Laser Institute now have a Fiber Optics Lab and an Optical Fiber Fabrication Lab.

When he’s not in the lab, Amezcua also teaches classes in photonics and fiber optic communications and enjoys meeting students who will eventually go on to join the research group. His advice to budding researchers? “Patience, a lot of patience. Because things take time when you do research; they don’t work the first time, usually. So you need to be a bit persistent and try to make them work and understand why they won’t.” He said creativity and being open to what’s happening in the world also makes a good researcher.

As far as plans for future research, Amezcua said that his most immediate goal is to develop ways to increase the power of fiber lasers even more, overcoming fundamental limitations, and “maybe scaling power by a factor of 10. That is something very difficult to achieve, but it’s probably the most immediate application,” he said.

He and his team are also working on increasing the capacity of optical communications by exploiting the spatial domain. “Current high-performance optical communication systems use [most of] the spatial degrees of freedom that are available: polarization, frequency, wavelength, and complex modulation formats. The only available spatial degree of freedom not used now is space, and we are working on that,” said Amezcua.

For more information about fiber optics, and UCF’s advances in the field, refer to this month’s Patent Trending blog.