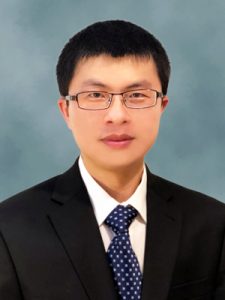 For many of us, fresh air and clean water are always in abundance. But what happens when your air turns to smog and your water becomes polluted? UCF Assistant Professor Fudong Liu experienced that first-hand and decided to do something about it. “Growing up in a small village in Tianjin, China, the air was fresh, and the water was clean,” Liu recalls. “I loved to be in nature. It often inspired me to write prose and poetry about natural beauty as a small child.” However, when he moved to Beijing to attend Tsinghua University in 2001, Liu realized that the world had many environmental challenges. “That was the first time for me to live in a large city, where I recognized the possible problems of air, water, and solid waste pollution potentially generated by high density population and fast economic growth,” he said.

Initially, Liu was majoring in building environment and equipment engineering, but after one year, he switched to environmental engineering and later pursued a Ph.D. at the Chinese Academy of Sciences. With his love of chemistry and his determination to solve environmental problems, Liu worked in research labs that focused on photocatalysis and catalytic advanced oxidation technologies for removing pollutants from water. He also worked on novel heterogeneous catalysts for vehicle emission control. “I saw myself as an environmental engineer and chemist working on the interdisciplinary and cutting-edge research topics of heterogeneous catalysis, surface science, chemical engineering, and environmental pollution control,” he said.

After receiving his doctorate in environmental science, Liu joined the faculty of the Chinese Academy of Sciences for a few years, developing catalytic technologies for diesel emission control especially in practical applications. He later relocated to the U.S. to research nanomaterial synthesis, surface science, and catalysis at the University of California, Berkeley, and the Lawrence Berkeley National Laboratory. He also worked at BASF Corporation at Iselin, New Jersey for three years. There, he focused on new concepts and novel materials for gasoline emission control. Now at UCF since 2018, Liu continues his work solving environmental challenges through heterogeneous catalysis for emission control and clean energy source conversion. Liu’s work also includes projects with UCF’s Renewable Energy and Chemical Transformation (REACT) faculty research cluster.

With his team at the UCF Environmental Catalysis Lab, Liu has invented three technologies that speed and improve the process of removing pollutants from the environment. Besides reducing toxic emissions for the automotive industry, the technologies may also help other sectors that rely on catalysts to manufacture products such as synthesized chemicals, alternative fuels and protective coatings.

One of the inventions that Liu co-developed offers a solution for automakers tasked with meeting increasingly stringent emissions standards. “It could be used to achieve more than 90 percent catalytic conversion at temperatures below 150 degrees Celsius,” he said. “It removes pollutants like carbon monoxide, hydrocarbons and nitrogen oxide from automobile exhaust.” The invention consists of low-cost, scalable approaches (support surface modulation and defect engineering) for using reducible metal oxide or mixed metal oxide materials to fabricate thermally stable, low-temperature emission control catalysts. 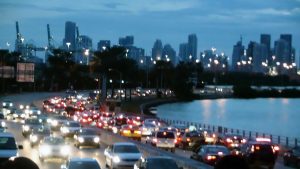 The idea for the invention came during discussions with research team member Shaohua Xie, Ph.D. “We were working on improving precious metal catalysts against metal sintering, which led us to develop different support engineering approaches to enhance the metal-support interaction,” Liu said. Sintering, which occurs at high temperatures, reduces a catalyst’s effectiveness by decreasing its surface area and changing its structure. Liu also collaborated with visiting Ph.D. student Wei Tan from Nanjing University to extend the approach into other catalyst systems for broader application.

The second invention provides a new universal technique called reverse loading and metal shuttling. Liu explained that the technology offers a strategy for fabricating precious metal catalysts that exhibit high catalytic activity and excellent thermal stability. The technique also allows the catalysts to survive even after severe aging under harsh conditions. Examples of precious metals include platinum, palladium, rhodium, iridium and gold. “This invention can be used to develop a diesel oxidation catalyst or a three-way catalyst to remove unburned hydrocarbons, carbon monoxide and reduce nitrogen oxides,” he said.

Liu said that he and Xie came up with the idea while working on single-atom catalysts and their structural evolution during activation and aging processes. The new method for making precious metal catalysts produces a structure that sandwiches precious metals between reducible oxide and irreducible oxide layers. “It was an adventurous idea but turned out to work effectively based on our continuous effort,” Liu said.

As his research continues, Liu is also collaborating with Talat Rahman, Ph.D., and Duy Le, Ph.D., of the UCF Department of Physics. “We are trying to understand the intrinsic mechanism behind this invention using a theoretical simulation approach,” he said.

“Nitrogen oxides are major pollutants emitted from internal combustion engines,” Liu said. Examples include gasoline and diesel vehicles and stationary sources such as power plants or pumping stations that run on natural gas, oil or coal. “This technology can help reduce nitrogen oxide emissions from such sources using cost-effective catalytic materials with high sulfur dioxide resistance, protecting the air and environment we rely on.” He and Xie are working with BASF collaborators to promote the technology in vehicle emission control areas, especially for heavy-duty diesel applications. 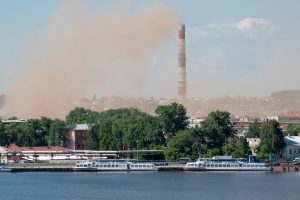 As far as his plans for future research projects, Liu anticipates that the heterogeneous catalysis research area for vehicle emission control will probably shrink to a certain extent due to electric vehicles. “However, the catalyst technologies developed in this area are usually highly robust, extremely stable, and resistant to poisoning for many other applications such as catalytic hydrocarbon conversion, chemical synthesis, fuel cell, and even electrocatalysis,” said Liu. “I still would like to work in this area ten to twenty years from now using the rich knowledge obtained in environmental catalysis research for renewable energy conversion, green chemical synthesis, or smart pollution monitoring and control.”