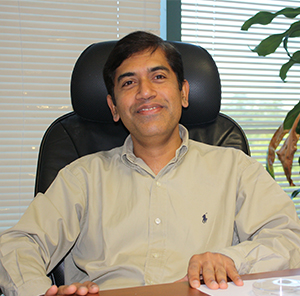 An interview with Dr. Jayan Thomas about his latest discovery, an energy-storing electrical cable.

You might know someone who’s notoriously always running low on battery power on their laptop or cellphone. New house-hunting TV programs about a few counter-cultural folks living “off the grid” highlight how plugged in most of us are. It’s a catch-22: we want our electronics to be lightweight, with less space occupied by heavy batteries, but electronics that are then more portable keep us tethered to an outlet every few hours. We live in a time when even cars can need an outlet.

Thankfully, UCF’s NanoScience Technology Center is the site of revolutionary technology that will someday save us from being tethered. I am on the fourth floor of its building in Central Florida Research Park, flanking the university’s main campus, on my way to meet Jayan Thomas, Ph.D., lead inventor of an energy storing cable.

We chat about my cursory knowledge of what he’s accomplished—a cable that transfers energy like the common copper wire in everyday electronics, but the only one that can store energy too. My basic explanations of it relied on what I’d read about it, from highly-technical documents filed to patent his work through the UCF Office of Technology Transfer to easily-grasped explanations in publications like USA Today and Popular Science. Foggy concepts like nanowhiskers, the foundation of the new cable’s ability, solidified when Thomas placed a sample of the energy storing electrical wire on his desk. 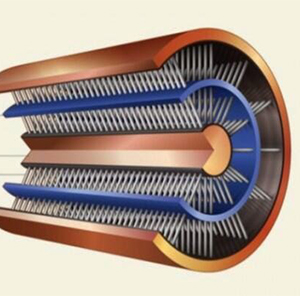 Between us on his desk lay a spool of red wire with its copper core visible on the end, the outer layer split and peeled back, an acrylic case displaying naked wire the width of string on a bag of hot tea, and an unassuming orange Post-it note pad.

“So you’ve seen this type of wire, right?” he begins. The lowly cable, just like the one used to charge my phone, is simply a strand of copper along which electricity runs, encased in a plastic-like polymer shell.

It’s this copper core that Thomas has turned into dual-purpose cable by growing nanowhiskers on its surface that serve to multiply its surface area. For supercapacitors (energy storage devices akin to batteries but able to charge and discharge high amounts of power very quickly) and other energy storage devices, the surface area is extremely important. The science lesson continues with an explanation of how electrons stored on the surface of Joe-Schmoe copper wire equate to the amount of electricity. I’m forming a mental picture in my mind as he talks: an analogy of how many people could fit in Manhattan before skyscrapers were built on its limited square footage and how many more are able to live in it now. The number increased enormously by each structure in a way similar to how additional electrons are collected with each of the nanowhiskers on the surface of a copper wire.

“So without any structure, the surface area is only this much of the coil of the copper wire. But once you have all of these nanowhiskers, you have so much enhancement of the surface area that you can store the energy,” he says. The possibilities of this new cable come into play when the wire can augment or replace the need for energy storage devices. He gestures to my phone, but goes on to talk about the applications in hybrid and electric cars. This cable can make them lighter and more fuel-efficient; and the same concept applies on an increasingly-grand scale to electric busses, trains, airplanes, and spacecraft where reducing weight would mean less fuel with less cost and less environmental impact.

“In this case, you can see all the nanowhiskers. It’s not like that. There are BILLIONS of them, okay? This is just the representation,” he says.

“You can see here, this is the actual one we developed. So, there you can see that it is very small.”

Looking at the short section of famed wire in its acrylic case on the desk, I joke that I must not see it because I’m not wearing my glasses. He’s halfway through an impassioned explanation before he joins me in laughing at the obvious absurdity of ever seeing a nanowhisker with the naked eye.

Unable to accurately say how long a foot is unless a ruler is handy, I can’t comprehend the size of a single nanowhisker when he says “one billionth of a meter.”

Thomas explains that a one centimeter area of the paper—a planar surface, one without any vertical structure on it—would hold, if it were possible to glue nanowhiskers on its surface, billions and billions of the tiny structures. “Then what you’re getting is a huge surface area. Now you can see that instead of this surface you have so many nanowhiskers and so much enhancement of the surface area. So, think about the reactivity now. Before, it was just this much. Now…”

“That’s the whole point of nanotechnology,” he says.

The concept of the scale is mind-boggling, and he’s driving it home a second time with the orange sticky notes again. “So imagine that this is one centimeter by one centimeter by one centimeter, one centimeter cubed. If I split this into nanometer-sized cubes, and if I put them one-by-one on a surface, it can fill more than a football field – one and a quarter football fields. Now you can imagine that when a one centimeter cube of that material is converted to such a huge surface area, that means it can show better properties. It’s better, all of the characteristics, when you make it into nano. That is the whole point of nanotechnology. We are converting the surface into nanowhiskers so that you can get a lot of surface area, so that you can store all of your charges on the surface, so the capacity is going to be considerably enhanced once you have all the nanowhiskers.”

Having explained supercapacitors in one of the many branches of our conversation, he now adds that what makes it super, as opposed to a Clark Kent capacitor, is how it can provide “ten thousand or even sometimes a hundred thousand times more capacity than capacitors.”

There’s a change by now in my understanding of supercapacitors, the type of energy storing device the new energy storing electrical cable is, from what I learned before talking to the cable’s inventor. Where I once thought of batteries as the 99% among energy storage devices, relegating supercapacitors to esoteric, theoretical work in labs like the ominously glowing one down the hall from Thomas’ office, I now know them to be a critical part of technology distinguishing the modern era from that of Little House on the Prairie. 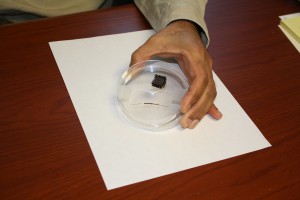 As a supercapacitor, the new energy-storing electrical cable can replace conventional supercapacitors when it’s used in place of standard, non-energy-storing wires. The new cable can be woven into a textile too, a piece of which sits next to the wire in the acrylic case on Thomas’ desk. Thinking of an image born from the union of “cable” and “powerful,” I’d been picturing the woven cable like the fabric of a bulky sweater. In reality, the tight weave of tiny wires could have been a little piece of the black tarp sitting in my garage at home and I wouldn’t know the difference. This thin, densely packed textile version of the energy-storing electrical cable is yet another reason for its fame.

While a hypothetical 2017 model Prius, with its wires replaced with the new technology, could be lighter and roomier without the supercapacitor it would otherwise need to start and accelerate, and an electric train of the future could go further with less energy, lightened without its once-needed supercapacitor, the possibilities of the cable as a textile are even more impressive. This cabled textile could be woven into a jacket that charges its owner’s electronics or incorporated into the body of a car, with its tarp-like tight weave encased as a solid form.

Among the applications that have me most excited, he talks about a charging cable, like the one used to charge my phone, and how it could, someday, be unplugged and still charging the electronics it is paired with. He talks about smartphones that would not have a chunk of space taken up by their battery because the case incorporates this technology and can store energy, enabling smaller phones with better features.

Of course, the applications for consumers down the road pale in comparison to the effect such energy storage possibilities have on industries like aerospace and defense.

Giving examples in an inexhaustible list of applications, from clothing to transportation, his voice begins to trail off when I ask Thomas about how he came up with the idea for the energy-storing cable.

“I heard you were walking around your neighborhood and saw an ordinary cable…” I prompt. He goes back to the beginning, when he and a student of his were working with copper foil, adding nanostructures to the surface to create a better supercapacitor, but not yet thinking of a cable.

True to the rumors I’d heard about the cable’s unassuming beginnings, he went on, “…one day I was walking around my community, and that’s usually a quiet time, and I’m thinking about some of these things. I saw some cables like this lying around, maybe from the cable company or somewhere like that, and suddenly this idea came to my mind, you know, ‘Oh! We are making all these copper things right now…’ I’m thinking about what is going through this cable: nothing but copper. If we can convert that copper into this type of thing, that would be cool.”

“You understand the thing, right?” he says in excitement. “The same wire, that is the point. The same wire can be used for electrical transmission as well as energy storage. That is the cool thing.”

Armed with the idea, Thomas came to his students in the lab to begin working on the cable. It’s reality now, but there’s more to be done. The cable’s potential demands more research.

In a way, his answer is exciting because of its simplicity: “No.”

After we’ve finished talking and parted ways, the elevator doors have closed when a grin on my face is evidence of an imaginative little thought that has me looking forward to his next big announcement even more.