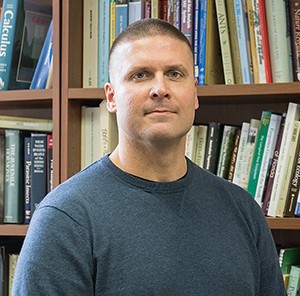 Growing up in a rural community in New England, Joshua King, Ph.D., entomologist and associate professor in the Department of Biology, began his exploration in the life sciences as many children do: outdoors. With a voracious curiosity, King developed a hobby of observing and collecting insects. Inspired by the support and encouragement of his high school life sciences teacher, King decided to pursue biology as a career.

He attended Tufts University and received his B.S. and M.S. in Biology. After a semester abroad in Australia during his junior year, King knew that his academic focus would be on insects. His interests narrowed even more after receiving his Ph.D. in entomology at the University of Florida and during his postdoctoral studies at Florida State University (FSU). He focused his attention on one exotic insect that is a common and painful pest throughout the Southern U.S., from California to Florida: the fire ant.

As part of his postdoctoral work at FSU, King focused on the development of non-toxic methods to control fire ant colonies in pastures.

King explained one such non-toxic method: “It’s a simple idea, using hot water to kill fire ant colonies. In the original version [that King is improving upon], you have a giant pot, like a crawfish boil or turkey fryer, that you would take out in the field, boil 20 gallons of water, and pour it on the colony. However, that’s extremely inefficient and takes forever.”

The prototype he developed with Walter Tschinkel, Ph.D. at FSU, using a charcoal-fired kiln to heat the water, had similar challenges. It was unwieldy and had issues with water flow. Despite the design challenges, King remained intent on pursuing an eco-friendly method to control and kill fire ants.

When King came to UCF, he collaborated with an agricultural fabricator to improve the design. Together, they created a high-temperature, high-volume, fuel-powered, mechanized system that can be hauled on a trailer. Over the summer, King used his machine at Fort De Soto Park in St. Petersburg, Florida, where endangered and protected sea turtles lay their eggs on the beach. Sadly, the park was losing a large number of hatchling due to fire ants.

“If there are fire arts foraging near the nests, the hatchlings are in great danger. Fire ants will attack and sting, and sometimes kill, many young turtles. The hatchlings are two to four inches long—they are quite small. The fire ants attack their soft body parts, primarily their eyes and around their mouth and head. The hatchlings are small enough that being stung a few times by fire ants can be lethal,” King said.

King applied for emergency funds from Florida’s Sea Turtle Specialty License Plate program so he could help protect these nests.

“The park staff was actually digging up the nests to avert disaster. I was given these funds to remove fire ants around sea turtle nests for the summer, and it was great. We eliminated greater than 90 percent of the fire ant colonies from around the nests and really reduced the fire ant problems. So it was very effective,” he recalled.

In fact, King was astonished that his system far exceeded his expectations. The entire process was very eco-friendly, and all it took was gallons and gallons of hot water, heated to 150 degrees Fahrenheit, to eliminate the fire ants. You can read more about this invention in this month’s Patent Trending blog.

King was attracted to UCF for several reasons. One, was location. The majority of his work (studying fire ants) primarily occurs in the Southeastern U.S. He was also impressed with the resources that a major research institution could afford him and his work. UCF’s rigorous research environment allowed King to meet and collaborate with other colleagues who work on similar research questions. He was also attracted to UCF’s Ph.D. program in Conservation Biology that brings in graduate students in the top of their class who can work with King on his research projects in addition to pursuing their own research interests.

King appreciates how UCF encourages partnerships outside of academia. “The university has been a fantastic resource for finding and making connections with people in business and industry,” he explained. Along with federal and state funding, King attributes these relationships to the success of his lab.

And he attributes the success of any scientist to curiosity and persistence. “A lot of what we see in science as success is product of repeated failure. [Research] is not a career to work in if you’re a thin-skinned person, because you’ll be rejected a lot. But that’s why we have processes like peer review. It’s a corrective aspect of our work, where oftentimes, even if you have a great idea, it can be made even better with input from other people and other ideas with a different perspective,” King said.

How does a researcher keep going in the face of expected, repeated failure? It helps to be very interested in your research topic and exploring how it can make an impact on the “big” picture.

“I’m interested in insects in particular. It has always has been a hobby of mine, so that keeps it very interesting. I’m also interested in making the world a better place. If we can figure out ways to use fewer pesticides to solve our pest problems, if we can figure out a little bit more about how the world works, about how ecosystems function, these are important things to know [in the pursuit of making the world a better place].”

King’s curiosity and persistence as a scientist has helped him create a simple solution to a pervasive problem that adversely affects both people and animals. If you want to learn more about King’s fire ant control system, contact Brion Berman.