Dr. Ken Stanley and the Myth of the Objective

It’s everywhere. From the self-help section of your local bookstore, to tips you hear 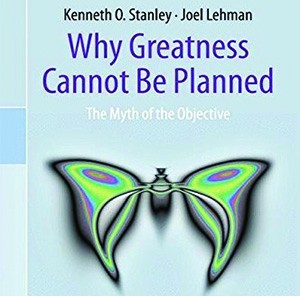 on the radio, to articles sprinkled across the Internet, there is an obsession with objectives. Without setting specific goals and measurable objectives, you hear over and over, you can’t get to where you want to be in life.

But Ken Stanley has discovered we’re often better off without objectives.

He’s shown our preoccupation—and often obsessive preoccupation—with the almighty objective can keep us from great achievements. Greatness can surprise us when we follow promising results, expected and unexpected, instead of throwing out those that aren’t in line with what we aimed for at the start.

This UCF College of Engineering and Computer Science professor studies how computers accomplish great things through the process of evolution. Like our biological evolution over millennia, lack of an explicit final objective doesn’t mean a lack of progress.

Introducing this paradigm shift to those who wouldn’t be reading highly technical articles on computer science research, Stanley’s soon-to-be-released book, co-authored with Joel Lehman, a UCF Ph.D. graduate who studied under Stanley, details why greatness can’t be planned and the myth of the objective.

Why Greatness Cannot Be Planned: The Myth of the Objective applies evolutionary computation—how computers discover and create best—to everyday life.

Stanley explained the evolution of the book, saying “These ideas began with ideas in computer science. We started to notice that certain types of processes that you do on computers tend to work better if you don’t have an objective. And these are usually processes that are trying to discover something.”

What do computers discover? “They might be trying to discover how to control a robot that needs to navigate a building,” he says. “So you can think of that as a process of discovery. What we found is that a lot of processes of discovery like this work better if you don’t tell the computer what, for instance, the robot needs to be able to do in the end. In other words, you don’t provide an objective.”

“It’s very counter-intuitive because most people think you have to have an objective in order to achieve something,” he explains. But through algorithms like those a computer would use to discover how a robot should successfully navigate a building, Stanley and fellow researchers found that the prevailing belief isn’t always true.

You might hear the combination of “a random accident” often enough to think of it as an undisputed pairing. But while an accident is unplanned, it’s not without a chain of events that led up to it.

“You started looking at something because it was interesting and you just didn’t have a specific objective in mind,” he says. “But it still took intelligence to know that this is an interesting path to follow, and that’s the real spirit of what the book is trying to convey: that people need the room to be able to explore paths that their intuition tells them are important, even if they don’t necessarily know where they lead, which means they don’t have an explicit objective.”

Stanley hopes the book will provoke a conversation about why we run almost everything through objectives. The conversation begins with questions about why we’re afraid to let people explore without knowing where they’re going. “What’s really so wrong with doing that? Why have we become so afraid of allowing that to happen?” he asks.

What will happen when we ask ourselves to discover without objectives?

Read part two of this month’s Faculty Feature series on June 1. To learn more, check out Dr. Ken Stanley’s Why Greatness Cannot Be Planned: The Myth of the Objective on Amazon.com, due out May 14 and available for pre-order now.