On most summer days, almost like clockwork, by mid-to-late afternoon, it rains in Central Florida. 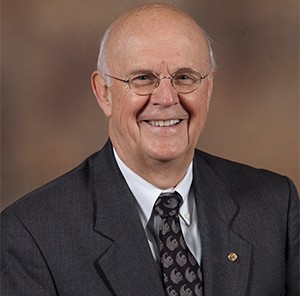 Usually, it’s not a gentle rain shower, but more of a sudden monsoon. It’s not uncommon for more than a couple of inches of rain to fall in just one afternoon. The streets can easily become swollen and overrun with gushing rain. It flows through gutters and dumps into sewers. Many times, stormwater floods streets and yards, causing property damage and sewers to overflow. This is why stormwater management is the key to keeping flooding and pollution at bay and water where we need it.

Marty Wanielista, Ph.D., a professor at UCF for 45 years, leads the Stormwater Management Academy and champions the importance of stormwater management on an international level. He believes that we have the power to make our lakes safe to swim in, to keep springs from drying up, to save wildlife from displacement and death, and to preserve the quality of our water and protect what we love.

Stormwater can be a resource or a threat, depending on how it’s managed. Imagine for a moment that you are going to light a fire in your home in order to stay warm. You’ll want to be sure the fire is managed by keeping it in the fireplace. The fire isn’t a bad thing—you need it in this situation and can use it to its full potential while staying safe as long as you’re managing it. In textbooks, numerous peer-reviewed publications, and many talks at conferences, Wanielista and his colleagues have set out to dispel myths and misunderstandings about stormwater management.

“Why don’t we use stormwater?” he asks. The main misunderstanding running rampant is that stormwater is useless; yet collecting stormwater has three immediate cost-saving benefits:

“I always take the positive attitude that we can solve these problems and I forget that some of the solution to the problems is to educate people on what’s happening,” he says.

Wanielista recalls a project that first showed others that by controlling pollution from the street, the runoff, you could improve the quality of a body of water—in this case, Orlando’s own Lake Eola.

He and his team celebrated their success when the City of Orlando received a second $750,000 grant to clean the water by managing stormwater runoff. Since this effort in the late 70s, the city has been able to use less pesticides and herbicides in the lake. “The water’s cleaner. That was a turning point that produced a lot of publications for us and demonstrated that what we were talking about was real, and that the solutions were real also. We used infiltrations systems, meaning [we] put the water into the ground before it reached the lake. We used filter systems, and we did some lake treatment before we turned that project back to the city.”

For his own success, Wanielista has received numerous local and national awards. He credits both UCF’s early foundation of the importance of the individual and what it stands for today as America’s Partnership University, for his success. “We are encouraged to find partnerships and work with others,” he explains. “I think the university provides an environment for folks to work in that’s very conducive to accomplishing things. We’ve always said that right from the beginning, and I came the year after it opened.”

In that time, he’s witnessed and propelled UCF’s significant contribution to professions that rely on stormwater or are directly related to stormwater. “I like to say that the value of a university is in our product and our products are students,” he begins. “That’s where all the folks that have graduated, both in engineering and the sciences, come in. If it wasn’t for those professionals that are designing, operating and maintaining these systems, we’d have more flooding, more bad lakes, more pollution, more situations where we’re investing greater amounts of money to return things to a usable state.”

Beaming with UCF pride, he says, “I’m very proud of those we graduate in the sense that they’ve made such a contribution. The better the student does, the better the university does.”

Stormwater management isn’t something you’ll hear about every day. But thanks to Wanielista’s work to make the muddy concept understood, Central Florida’s future can be bright and clear.