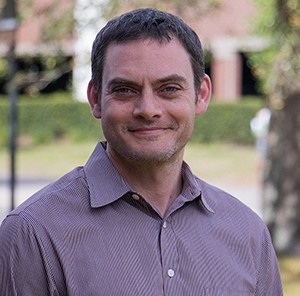 Lawrence (Larry) Shah, Ph.D., research assistant professor in CREOL, The College of Optics & Photonics, is now working in the lab where he started out as a doctoral student almost 20 years ago at UCF – the Laser & Plasma Laboratory (LPL), which is headed by his former advisor Martin Richardson, Ph.D. After he received his Ph.D. in Physics in 2001, he worked as a postdoctoral student in the Lawrence Livermore National Laboratory in Livermore, California before moving on to work in industry at IMRA America — a company which produces ultrashort pulse fiber lasers.

After his time in industry, Shah returned home to UCF in 2008. With the knowledge he gained about fibers at IMRA America, he was ready to take on the burgeoning field of fiber lasers—specifically, lasers based on optical fibers doped with rare-earth metals thulium and ytterbium which can be used in telecommunications, materials processing, healthcare applications, and more.

A sizable amount of Shah’s work is basic research funded primarily by the Department of Defense (DoD), and focuses on experimental approaches to improve fiber laser performance. In one of the newest projects, funded by the Air Force Office of Scientific Research (AFOSR), he is creating new approaches to power scaling in fiber lasers as part of a multi-university team, along with fellow UCF professors Rodrigo Amezcua Correa, Ph.D., research assistant professor of Optics & Photonics, Axel Schülzgen, Ph.D., professor of Optics & Photonics, and Richardson. To learn more about Shah’s work in fiber lasers, you can read this month’s Patent Trending blog post.

When it comes to the academic environment and opportunities at UCF, Shah appreciates the interdisciplinary relationships that are formed at CREOL, specifically how he is able to bounce his ideas around with other researchers within other disciplines.

“It’s a really unique opportunity, and it’s something that, as a graduate student, drew me here,” Shah said.

He credited MJ Soileau, Ph.D., vice president of Research and Commercialization at UCF, for his ability to attract top-notch professors to CREOL and Eric Van Stryland, Ph.D., professor of Optics & Photonics, for transitioning CREOL from a research institute to a college. Shah recognized Richardson as well as Kathleen Richardson, Ph.D., professor of Optics & Photonics, as large influences in his career.

Shah’s work can be described as a fusion of part science, part engineering: “When I went to Livermore [as a postdoctoral student], and it still feels very true, the joke at the time was that I felt like a Ph.D. tech,” he explained (the techs were responsible for the more mechanical tasks of experiments and projects). He further explained the unique scientific process that occurs in his lab today:

“First you need engineering sense to say, ‘That is not where that goes. That shouldn’t be there.’ and you also need to be a critical scientist and ask ‘Does the data make sense? What trend do I expect to observe?’ To get [the devices] to work [in the lab], to make them work properly and stably, there is science and engineering, but it’s almost like driving. That skill becomes a part of your intuition. You’re no longer really thinking about it, you’re just doing it. You have to be guided by good science and good understanding, but the most fun and frustrating times in the lab are when there is a result that does not make any sense and you have to figure it out.  Most often, it is a silly error, but sometimes it is really something ‘new’,” Shah explained.

In addition to maintaining the instinctive balance between a scientific mind and a mechanical mind, Shah believes that a successful researcher requires a few other attributes to sustain one’s work.

“Definitely, you have to be stubborn. The research has to be exciting to you. You have to like it—love it, actually,” Shah remarked. He further explained how it’s the students who are obsessed with a research question, who ponder about it as they sleep—these are the ones are fueled by curiosity, which will carry them to satisfying, fruitful careers in science.