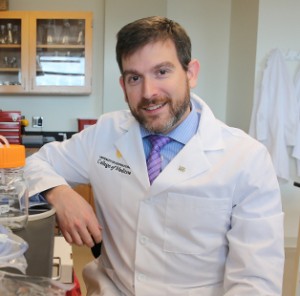 In his early years growing up in Detroit, College of Medicine assistant scientist Bradley Willenberg, Ph.D. possessed a curious mind and the hands of an engineer. He dismantled, rebuilt, and repurposed a variety of items, such as old bicycles, so he could understand how things worked. He inherited his innate scientific prowess from his parents: his mother is a physician and retired U.S. Navy captain, and his father—a physicist and engineer. At one point, Willenberg’s mother threatened to stop buying toys because he took them apart so often.

When he wasn’t disassembling things, Willenberg was exploring the world around him with a scientist’s eye.

“I had telescopes and microscopes. I’d examine standing water and look at the planets at a fairly young age. I remember looking through the telescope at the sun for the first time with special filters. It was really amazing. I had seen other things, the moon and some planets. But none of them were as big, bright, and close, so you couldn’t appreciate the detail. I remember that moment very well,” he said.

As a student, the sciences came easily to Willenberg. His mother encouraged him to pursue a career in medicine, but he was not entirely convinced. In 1993, he began his undergraduate studies at the University of Florida (UF) and ultimately majored in interdisciplinary studies with a focus on biochemistry and molecular biology.

After completing his undergraduate studies, Willenberg worked as a biochemist at a private company while applying to medical school. After about a year in industry, however, he discovered a graduate program that he considered a better career fit and applied to be a biomedical engineering doctoral student at his alma mater. Willenberg received his Ph.D. from UF and then continued there for his postdoctoral studies, followed by appointments as an assistant research scientist, lecturer, and adjunct scientist.

With the opportunity for growth, Willenberg came to UCF in September 2014, accepting a research appointment as an assistant scientist, working in the lab of Edward Ross, M.D., Chair of Internal Medicine in the College of Medicine and former colleague and supervisor from UF. This lab group’s research interests involve tissue engineering (e.g., transforming a pig kidney for human transplantation) and biomaterials projects which focus on developing injectables and gels used in tissue engineering and wound healing. This particular area of research is based on patented capillary-alginate hydrogel materials Willenberg invented during his doctoral and postdoctoral studies.

Another major research project Willenberg has been working on involves disease-carrying mosquito surveillance. This observational work began during his time as a scientist at UF and has evolved into a device that attracts mosquitoes and then changes their color if they are carrying the disease. Because this invention operates passively (i.e., uses no electricity) and does not require sending specimens to a lab, monitoring mosquitoes is made easier within the developing world, where these insects carry diseases such as dengue fever, malaria, and yellow fever.

In November 2015, the Bill & Melinda Gates Foundation awarded the project a $100,000 Phase 1 Grand Challenges Explorations Grant with a focus on monitoring another mosquito-borne disease, chikungunya. Willenberg is also currently supported by the state of Florida to develop a sensor to detect salivary proteins in mosquitoes. Additionally, with the current outbreak of the Zika virus throughout South America, the Caribbean, and the United States, including cases found in Florida, Willenberg plans to partner with the state of Florida to monitor this disease. You can read more about the mosquito trapping and color changing device in this month’s Patent Trending blog post.

As is the trend within science and at UCF, Willenberg’s research is highly collaborative and interdisciplinary. For example, he noted that the mosquito surveillance system could not have been created without professor and materials scientist Sudipta Seal, Ph.D. and his team bringing vital nanotechnology expertise on which the color classification system of the insects is based. He also credits Dr. Ross for the opportunities to work on various research projects—prospects that he says were not available to him anywhere else as an academic.

“I was able to come in and have the freedom and the encouragement to work on a diverse set of projects. Not only with the freedom and encouragement, but the actual resources to start those projects, and the support to go after grants as a PI [principal investigator],” Willenberg said.

In addition to consistent institutional and extramural support, as well as a voracious curiosity, a researcher needs internal fortitude to persevere in the face of challenges.

“Research is like gambling—you lose most of the time. Nothing ever works the first time, and if it does, you [often] can’t repeat it. A lot of times, you spend tremendously long hours, nights, and weekends putting things together that don’t get funded,” Willenberg reflected.

He believes it takes a strong internal motivation to continue the inquiry and persevere beyond the disappointments, such as a sense of personal accomplishment for achieving success in an area that has eluded other scientists.

He is also driven by a strong sense of altruism, desiring to utilize the gifts, talents, and advantages that he possesses for the greater good:

With a drive to investigate and innovate, Willenberg is making the world a better place as an engineer and scientist. To learn more about Willenberg’s mosquito surveillance system, contact Brion Berman.