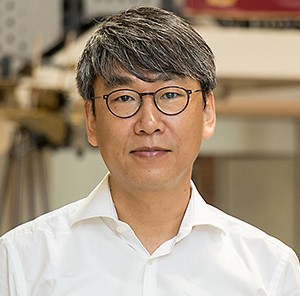 Associate Professor Hae-Bum “Andrew” Yun, Ph.D. once aspired to be a historian; he still reads a copious amount of history books in his leisure time. But, as he grew up around his father’s construction business, Yun decided to become a civil engineer, earning a master’s degree from Carnegie Mellon University, and a doctorate and a post-doctoral fellowship from USC in Los Angeles. After his fellowship, he joined UCF’s Department of Civil, Environmental and Construction Engineering (CECE) as an assistant professor in the spring of 2010. Yun was drawn to UCF because of one key aspect: the university’s age—UCF was founded in 1963.

“Compared to more established universities with a longer history, UCF is young, so we have a lot of new ideas, which is great for a research institution. Also, we have a lot of resources that are not available to most of young institutes—particularly a lot of excellent students and faculty. This collaboration with excellent faculty is very helpful for conducting interdisciplinary studies,” Yun stated.

The field of civil engineering concerns itself with structures we use every day: buildings, roads, bridges, railroads, subway systems, etc. Dealing with public assets, this discipline requires quite a bit of consensus and collaboration—within academia, with the government (both at the state and federal level), and with industry. Yun’s approach to this field is similarly multi-pronged. He explained that his studies have been far-reaching (from electrical and mechanical engineering to physics and biology) and have helped him in his interdisciplinary research. Yun believes this approach is the key to solving many engineering problems, which have grown in complexity over the years. He reflected on an example of this collaborative spirit when he was at Carnegie Mellon.

“I conducted research to develop a micro-electro-mechanical system (MEMS) using nuclear magnetic resonance (NMR) spectroscopy to detect chlorine intrusion in a concrete structure. In this project, five professors were involved, from civil engineering, physics, electrical engineering, chemical engineering, and robotics. I had to present my work in front of them every week, and although it was very challenging, it was very helpful for the project, and a very good interdisciplinary education,” Yun said.

One invention that Yun has created is a highly accurate structural health monitoring system that can be used on a variety of structures (buildings, bridges, tunnels, walls, dams, etc.) and will be detailed later this month in the Patent Trending blog.

Another invention that Yun has developed is a software system that monitors the structural health of roads. Yun explained that the US Department of Transportation (DOT) uses vehicles, traveling at about 60 MPH and above, with cameras to capture millions of images of roadways. All of this work is manually done. Yun’s technology efficiently captures this data automatically and more precisely, tracking each individual crack, down to less than a millimeter. By gathering this data, different types of statistics about roadway conditions can be monitored over time.

“We’re doing this because state and federal governments spend billions of taxpayer dollars to repair the pavement. If we know the pavement condition quantitatively, then we can increase safety on our roads and can allocate our budgets more effectively. And if we collect measurements over multiple years, then we can have a precise prediction of when the pavement will fail, so we can create better strategies and policies,” Yun explained.

Yun is also working on having this surveying work completed by a self-driven car, so this technology becomes a fully automated solution.

In terms of his future research, Yun has primarily studied structural health monitoring, which mainly involves sensors for a system, such as a bridge. He is now expanding his focus to NDE using spectroscopy technologies that allow for atomic level of accuracy under field conditions, which was not previously possible.

Andrew Yun’s research in civil engineering helps to improve our everyday lives—from the buildings we live and work in, to the roads and bridges we drive on. To learn more about licensing opportunities, contact Raju Nagaiah.