Thanks to UCF’s strong collaborative, multidisciplinary research environment, Professor Andre Gesquiere and his team have developed a technology that can reduce the need for animal testing and another technology that can better target cancer cells. “What was and is still very attractive about UCF is its unrelenting focus on interdisciplinary interaction,” Gesquiere said. “Here, [at the UCF Nanoscience Technology Center], we have engineering, physics, chemistry, and biomedical faculty all on this floor, and we all talk to each other.” He noted that many universities have interdisciplinary centers “on paper,” but no real interaction takes place.

Originally from Belgium, Gesquiere joined UCF’s Chemistry Department and the Nanoscience Technology Center in 2005 after finishing his post-doctoral work in molecular electronics at the University of Texas at Austin. Not long after, in UCF’s multidisciplinary environment, Gesquiere expanded his research beyond spectroscopy to nanomedicine and biomedical applications.

A viable alternative to testing nanomaterials on animals 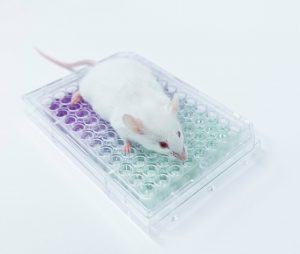 Gesquiere’s expanded view of nanomedicine led to the development of a new system, co-created with UCF Ph.D. student Edward Price. The system predicts the biodistribution of nanomaterials (NMs) within the body without using animal testing. “What we’ve done with our new system is combine in vitro biology with different spectroscopic and computational methods,” he said. “So it pretty much crosses the boundaries of several disciplines.”

The system consists of a novel in vitro fluorescence assay, a cell kinetics simulation, and a whole-body animal simulation. “Basically, we can look at cells in a petri dish and predict what happens inside a body, and we can do that with cellular resolution inside the tissue,” Gesquiere said. “That’s opposed to just throwing everything in the body and seeing what happens,” he said. “This way, you can at least reduce animal testing, because you have some prior knowledge before you do an experiment.”

Gesquiere noted that the traditional approach to determining how NMs affect a body is to inject a sample into a research animal, sacrifice the animal, and then do histology. “It’s observational, not predictive, and there are thousands upon thousands of different nanoparticles waiting in labs to be evaluated. If you have to test all these nanoparticles on animals, it not only becomes cost-prohibitive but ethically prohibitive, as well,” Gesquiere said.

Besides its ability to predict the biodistribution of NMs in a body, the technology is also very cost-effective and simple to apply. Many institutions already have a cell culture lab with instruments like a plate reader and an incubator to use with the assay. “You can run our software on a laptop. It doesn’t need something like a cluster supercomputer,” he said.

Though animal-free or reduced animal testing models exist, Gesquiere said those techniques are for small molecules but not adapted for NMs. He explained that when small drug molecules mix with blood, they diffuse through the cell membrane; however, NMs sediment. Therefore, unless the nanoparticle is extremely small (less than 10 nm), it can only enter cells through an active transport mechanism such as endocytosis. When triggered, the mechanism causes the cell membrane to engulf the NM, so that the cell environment can internalize it.

How the system works

According to Gesquiere, the system’s in vitro assay enables scientists to measure interactions between cells and the NMs that they want to study. The assay can be used to test most fluorescent NMs, such as negatively charged quantum dots. Quantitative data, like the NMs uptake (the number of particles visible inside a cell), then go into the cell kinetics simulation. This simulation incorporates a genetic algorithm to extract rate constants for cell adsorption, desorption, internalization, and degradation of the NMs used in the assay. “These kinetics are missing in the small molecule models, but you need them for nanoparticles,” Gesquiere said.

The output from the cell kinetics simulation provides the input to the whole-body simulation. The model takes into account tissue volume, cellular compositions of organ tissues, blood flow rates, vessel fenestrations, and kinetics of cell-NM interactions. A distinguishing feature of the simulation is the way that the researchers modeled how NMs move through tissues and blood vessels in the lymphatic system. The UCF simulation uses a physics model for fluid dynamics that simulates the way a sphere travels through a pipe riddled with varying-sized holes until it reaches a hole big enough for it to fall through. “That feature works really well since blood vessels have pores in them, and that is basically where the exchange with tissues happens.” 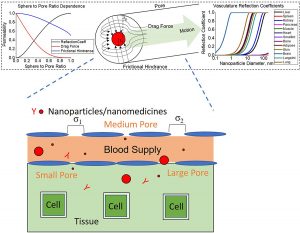 Illustration of the fluid dynamics model used in the invvention.

Gesquiere credits Price with turning the project ideas into a product, and finding studies and publications that accurately reported data about animal physiology, which they used for the simulation as well. “His literature search and coding abilities were very impressive. He looked through publications from the ‘60s and ‘70s where researchers revealed that a mouse liver has two million cells or a rat’s spleen has one million cells.” Using that data, they scaled up the number of cells in the petri dish to the tissue volume in a body and developed models for a mouse, a rat, and a non-human primate. They validated the computational output against published whole-body animal data.

Over the next 5-10 years, Gesquiere hopes that methods developed in his UCF lab will become standard practice. “The EPA publishes dose-response models, but they don’t have this kind of distribution model. If we can get this adopted as an accepted standard for assessing how nanomaterials interact in a body and without animal testing, that will make a significant and positive impact worldwide,” he said.

More information about the research behind the invention is in Scientific Reports.

Another technology developed by Gesquiere was actually a serendipitous discovery. Gesquiere and Ph.D. student Khalaf Jasim began producing a nanoparticle for photodynamic anti-cancer therapy but ended up developing a new chemodynamic therapy instead. “For photodynamic therapy [which depends on external activation], if there’s no light shining on the nanoparticle, everything remains untouched. Then when you shine the light, it affects the cells that you want to kill,” Gesquiere said. “What we found is if we put this [nanoparticle] in cancer cells, the cells were dying even without light.”

After further investigation, they determined that the cores of the conjugated polymer nanoparticles (CPNPs) they created contained iron as a result of the synthetic process. This iron reacted with the excess hydrogen peroxide produced by the cancer cells to induce a form of iron-dependent cell death known as ferroptosis. The combination of the iron ions with hydrogen peroxide generates reactive oxygen species (ROS) in the cancer cells, leading to cell damage and death. “One of the properties of cancer cells is their high metabolism, and as a result of the high metabolism, they have a lot of hydrogen peroxide,” Gesquiere said. “And that’s what we basically exploit with this mechanism.”

While there are some ferroptosis-based anti-cancer nanotherapies, only a few have built-in tumor-targeting functionality, Gesquiere said. To address this issue, the team developed CPNPs conjugated with endothelin-3 (EDN3), a ligand that specifically binds with the endothelin-B receptors (EDNRB) of melanoma cancer cells. They showed that these CPNPs targeted the tumor cells that overexpress EDNRB on their cell surface and induced cell death, but left the healthy cells intact. Due to their flexible design, CPNPs can be useful against other types of cancers. “The nanoparticle design is modular, too, so we can change the ligand easily to target other kinds of cancers,” he said. The technology may even help provide treatments for hard-to-treat cancers, such as those that have metastasized, and offer a solution to treating multidrug-resistant or photodynamic-resistant cancers such as hypoxic tumors. 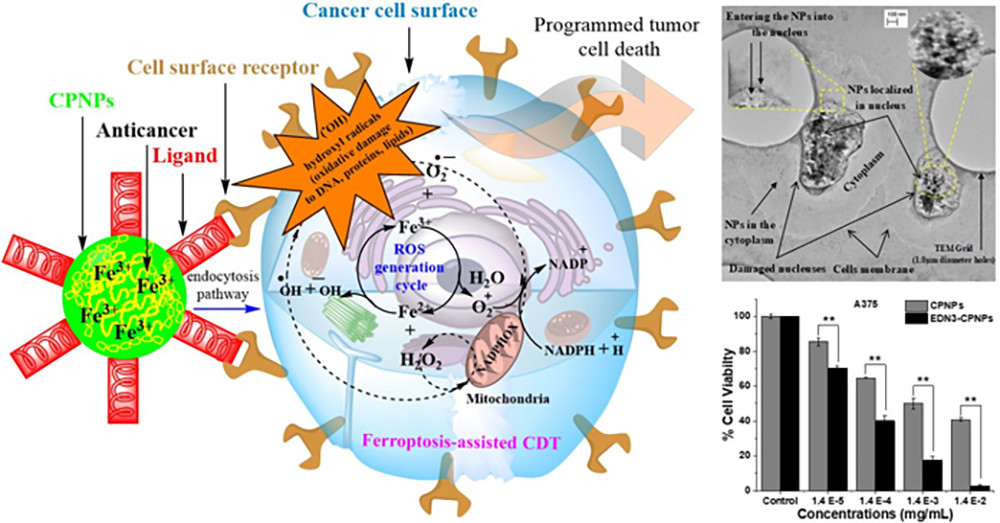 Gesquiere plans to test the CPNP design on other types of tumors and different tumor stages. “Would this work for a metastasized tumor? In melanoma, for example, if it’s stage zero or stage one, the survival rate is very high, maybe 90 percent,” he said. “But once it goes to stage three or four, where it has metastasized, the survival rate becomes 20 to 30 percent. So having this kind of tumor-targeted particle that activates once it’s inside the tumor cell has potential for metastasized tumors compared to the broad chemotherapy.”

More information about the research behind the invention is in Molecular Pharmaceutics.