Imagine a tabletop-size particle accelerator for treating cancer, devices that can propel probes into other planetary systems, or commercially viable fusion generators. All these things happen only with the right materials. Associate Professor of Optics & Photonics Romain Gaume hopes to develop materials for ideas like these into actual working technologies. “You can dream of some crazy idea, but at the end of the day, you need the material to realize that,” said Gaume. As a materials expert, Gaume leads the Optical Ceramics research group at the UCF College of Optics and Photonics (CREOL) and the Nanoscience Technology Center (NSTC). 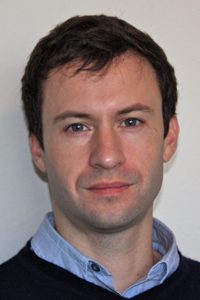 His experience in optics and photonics began while obtaining his Ph.D. in materials science at Paris VI University (now part of Sorbonne University). “I was fortunate to work very closely with a fairly prominent optics institute in Paris, and I got to learn optics first-hand. It was very interesting for me in many respects because I was applying my materials science background to solve optical challenges.”

Gaume then worked as a post-doctoral scholar and later, a research scientist at Stanford University’s Applied Physics and Material Science Departments. He joined UCF at the end of 2011. “Professor Martin Richardson was looking for people to enable the next generation of laser architectures, but he needed materials. So, he asked me whether I was interested, and I certainly was,” said Gaume. With the Optical Ceramics research group, Gaume’s work includes creating transparent polycrystalline materials for areas such as defense, sensing, nuclear surveillance and medicine. “Compared to glasses and crystals, transparent ceramics are polycrystalline materials with superior thermo-mechanical performance,” he said. Despite the many challenges associated with their fabrication, Gaume said the materials have already opened the door to 100 kW-class lasers.

Gaume recently talked with Tech Transfer about two inventions he developed to improve the performance of laser systems.

A Plug-and-Play Device for Calibrating an Optical System

Gaume, along with Associate Professor Matthieu Baudelet and Graduate Research Assistant Matthew Julian, developed a plug-and-play device for calibrating the optical components of laser-induced breakdown spectroscopy (LIBS) systems. LIBS is a well-known technique used to analyze the composition of solids, liquids and gases. The invention also applies to Raman spectroscopy systems, which identify molecules based on their vibrational modes.

He said they created the technology to resolve calibration problems they encountered while using a LIBS system to test nanopowders for purity. “There are two things that can happen if the material for transparent ceramics is not pure. Either light is absorbed, or the light gets scattered so that instead of propagating in a straight line, the light goes sideways, and we lose it,” he said. “Therefore, the material must be very pure and stay pure throughout the fabrication process,” Gaume said.

According to Gaume, as the laser light in a LIBS setup ablates a sample, a little spark (plasma) forms. The researchers analyze the spark’s light using an optical fiber that plugs into a spectrometer controlled by a computer. “By analyzing the light, we can retrieve compositional information,” he said. “But if the instruments are not well-calibrated, then the quantification is total garbage,” he said.

Figure 2. Laser ceramics being studied in Gaume’s group before sintering (white tablet on the right) and after sintering and polishing (left).

Though the idea of using LIBS to analyze the purity of ceramic powders is not new, Gaume said that he and the research team needed to refine the protocol to measure species ratio with increased accuracy. That includes being able to calculate the intensity ratios and wavelength values of each element. “There was nothing out there that allowed us to calibrate the wavelengths and the intensity of those lines at the same time,” Gaume said. “So that’s where our invention comes in.” 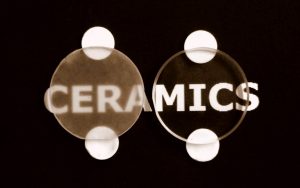 The invention provides a low-cost method for producing an optical calibration light source to fit the small space (which can vary, depending on the setup) where the laser beam interacts with the sample. “Wherever we would put the sample, we would insert our gadget,” he said. “But this time, instead of firing the laser, we fire the light source that is inside our device. We mimic a laser pulse that has heated the sample, and that has formed the spark, but we do this by turning on a special light bulb.”  That bulb generates a beam whose characteristics (such as shape, dimension, divergence, and spectrum) accurately represent one or more corresponding characteristics of the near-point source of the would-be radiated sample.

“The kick is that the light bulb is repeatable. Whenever we send that pulse of current, it creates the same light every single time. It mimics a certain temperature with spectral lines that are well known,” Gaume said. The calibration encompasses the spectrophotometer assembly, including the focusing and collection optics, the spectrometer and the optical fiber.

Figure 3. An example application of the invention using a flashtube light source powered by an electronics package.

“It makes sure the spectrometer is looking properly at the right things. The intensity is known and so is the correction factor between what happens on the platform and where the sample should be,” he said. “Hence, when we remove our gadget, and we put in the real sample, everything—the behavior of the commercial system is known accurately.” For more information about the invention, view the technology sheet.

Absorptive Cladding Material to Improve the Performance of High-Power Lasers

The second invention is a patented method for producing and using a cladding material to suppress transverse oscillations in solid-state, single-crystal or ceramic laser amplifiers. Gaume said that the technology came about while finding a material that could absorb light over a broad spectrum.

“When we build very high-power lasers, we’re propagating a laser across a gain medium slab. Each time it crosses a slab, it amplifies the light. But sometimes, instead of going longitudinally, the light is reflected inside the slab and bounces transversally from side to side,” Gaume said. “This transverse oscillation is problematic, especially at high power because it drains all the energy that we painfully stored in the gain medium, and the purpose of a laser is to store energy until we’re ready to use it. Plus, it creates instability in the laser, and we don’t want that.”

Gaume noted that at the time, co-inventor Eric Cunningham, Ph.D., was working with Zenghu Chang, Ph.D., in Physics, and they were using a different type of material called titanium-doped sapphire as the core of the slab. “That material has a very broad emission. The laser emits light from the middle of the visible spectrum to the near-infrared,” he said. So Gaume, Cunningham and co-inventor Shi Chen, Ph.D., set out to develop a cladding material that could absorb light over such a broad spectrum. 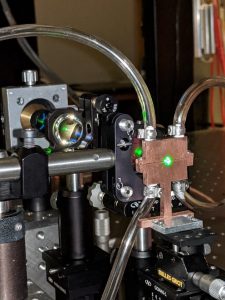 Figure 4. Test of a transparent ceramic at the College of Optics and Photonics (a collaboration between Prof. Gaume and Ivan Divliansky groups).

It wasn’t easy finding something with such a broad absorption band that could work effectively with sapphire. They discovered that carbon might work, “But we didn’t want carbon particles or soot in the material. We wanted something that is a little bit more diluted than that.” Eventually, they chose graphene, which not only has a broad absorption band but “is also a very intense absorber,” Gaume said.

“One of the ideas that went into the patent is that while we were compacting powders to make our ceramic, we could introduce, in specific places, either graphite, graphene or specific dopants that can make the absorption spectrum broader,” he said.

What resulted was a method for producing an easy-to-handle, non-toxic solid-state cladding made of the same material as the core of the laser amplifier but in a polycrystalline form. The material includes a broadband absorber such as graphene, a transition or a rare earth ion. Its refractive index matches the core’s index for all wavelengths and can suppress transverse oscillations across broad bandwidths (visible and near-IR spectrum). The cladding is also compatible with both cryogenic cooling methods and high-vacuum environments.

“That then opened a path for scalable laser architecture for high-power applications,” he said. “Whether it’s for Dr. Chang’s applications, attosecond lasers, or defense applications.” For more information about the invention, view the technology sheet.