Post-Doctoral Researcher Works to Push the Boundaries of Aerospace Materials 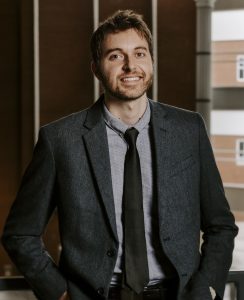 Since childhood, Quentin Fouliard, Ph.D., has always been fascinated with air transportation and how to make things faster, more efficient, easier and safer. Yet, it wasn’t until his graduate studies in Sevilla, Spain, that Fouliard realized how he wanted to apply those interests. “I was taking a specialization on thin films and ceramic coatings, and it was a coincidence, in a way,” he said. “I was discovering this topic, and that’s finally what I ended up doing for my Ph.D. dissertation.”

“We can characterize the coatings in-situ, during operation,” he said. “When you control the parameters of the materials and how they operate, you can optimize them and use the materials to their maximum performance.” As a post-doctoral researcher, Fouliard continues to develop sensor coating technologies and to “further push the boundaries of current aerospace materials.”

A Rare-Earth Doped Thermal Barrier Coating for Improved Temperature Sensing
One invention that the research team developed is a new kind of thermal barrier coating (TBC). “Thermal barrier coatings are widely used in turbine systems to protect the components as they operate at high temperatures,” Fouliard said. The invention not only protects components in extreme environments but also enables operators to capture accurate temperature readings. According to Fouliard, precise temperature measurements are crucial to attaining better engine efficiency, fuel savings, and safer operations. 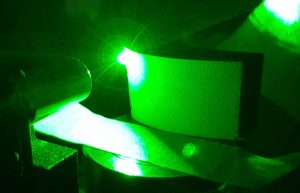 A TBC consists of a bond coat applied to the substrate (a metal turbine blade, for example) and a ceramic topcoat (such as yttria-stabilized zirconia) which provides the actual thermal protection. Over time, oxidation and heat cause the bond coat to generate thermally grown oxides (TGOs).

“Phosphor thermometry has proven to be effective at high temperatures using rare-earth or transition metal-doped ceramics that can be integrated into TBCs for temperature monitoring,” Fouliard said. He noted that the problem with existing phosphor thermometry compatible TBCs is that the ions are in the topcoat. “It’s a thermal barrier, so at the surface, it’s very hot, but at the bottom, it’s relatively cold. So you have a big gradient of temperature on the sensor, and you get a convoluted signal,” he said.

“The TGO layer is good in a way because it helps prevent further oxidation,” Fouliard said. “But it’s a bad layer because it’s the main cause of failure of the coating,” he said, noting that TGOs generate stresses inside the coating structure, causing delamination or spallation. Coating degradation can expose the area [the superalloy blade] to extreme heat and lead to an engine’s total failure. “This is why the invention is pretty cool—it’s the first time we can measure temperatures where failure is driven,” he said. The information helps operators determine an engine’s speed and heat tolerances and identify issues before they become critical. 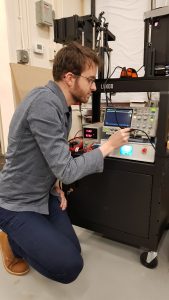 Figure 3. Dr. Fouliard with the instrumentation prototype that he developed to improve temperature measurements of gas turbine engine TBCs.

Another technology developed by the team is a device that takes remote temperature measurements while selectively partitioning the electromagnetic spectrum for higher precision. “So instead of collecting one single luminescent peak for decay measurements, we’re using the fact that luminescent ions can have multiple emission peaks. We can also use a combination of different ions at the same time. So now, you don’t have just one method of characterization. You have two or more.”

Fouliard developed a prototype of the portable instrument as part of his doctoral dissertation. The device includes a laser that generates a pulse onto the rare-earth-doped TBC of an engine component. Luminescent signals reflected off the lasered areas go to dichroic filters then to photomultiplier tubes which detect the different emission peaks (wavelengths) of the rare-earth ions. A controller then processes the signals and determines the temperature values correlating to the luminescence lifetime decay and intensity variations for each of the dopants.

The prototype was proven effective for two signals, but Fouliard said it could capture even more signals. “By using different emission peaks, you can use them to have, for example, one peak sensitive at one temperature range and the other one sensitive to another temperature range,” he said. Thus, the instrument provides a combination of temperatures and a way to compare varying intensities.

Fouliard said that he hopes to create a miniature version that attaches to the engine and is removable. “It could be placed on an aircraft engine and act as an in-situ probe. So if you want to check temperature parameters from the cockpit, you can check them,” he said.

A System for Mapping Temperature Gradients of Thermal Barrier Coatings
As for the third invention, Fouliard said that he wanted to find a way to characterize thermal profiles across the depth of translucent materials such as TBCs. He recalled his earlier statement that TBCs in extreme conditions can show significant temperature differences between the topcoat and bond coat. However, current measurement methods don’t provide an easy way to detect and analyze those gradients. Also, current TBCs do not contain a full topcoat of luminescent ceramic. “Instead, they deposit the sensing layer and then place an extra layer on top,” he said. “That adds to manufacturing costs, and it’s more difficult to implement.”

So Fouliard led the development of a system for using a fully luminescent TBC (both the top and bottom coat) and the phosphor thermometry device to “map” temperature gradients across TBCs’ thickness. “Instead of just one single data point, this can give you an entire temperature distribution inside the coating. You can get information about the degradation of the coating or overall functioning of the coating,” he said. With the invention, Fouliard said that 3D maps of a TBC’s temperature gradients are possible. Such information can provide better insights into an engine’s operating limits and potential weaknesses. Manufacturers can also use the invention to develop models for screening the dopants and designing multilayered TBCs for different environments.

One of the strengths of the invention is that it can potentially provide 3D temperature maps from only a single laser pulse. Each pulse can be repeated with a high frequency and decay times are generally of the order of microsecons which makes the method applicable on rotating turbine blades. Based on the luminescent ions already tested in standard coatings, Fouliard has been able to demonstrate the system’s ability to take precise measurements at up to 1200 degrees Celsius . “With more advanced phosphors that I didn’t use yet, we could very well be measuring higher temperatures past 1500 degrees Celsius.”