Researchers Meet with Legislators to Encourage Support for Photonics 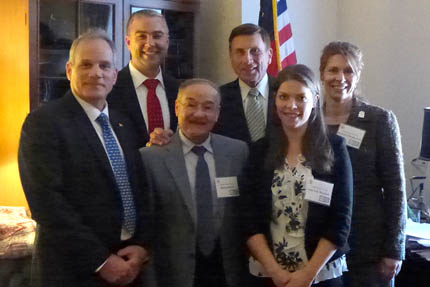 Representatives from the University of Central Florida (UCF) were among volunteers in industry and research labs from 16 states who visited dozens of Congressional offices urging support for legislation to continue the advancement of photonics research.  Photonics plays a crucial role in innovation, economic growth, competitiveness and bolstering national security.  Seventy-one percent of UCFs annual Center for Research and Education in Optics (CREOL) budget is derived from federal funding.  Robert Bernath, business development manager, Bahaa Saleh, dean of UCF’s College of Optics and Photonics and student Amy Van Newkirk, represented the university in Washington D.C. in late March.  The team’s primary mission was to stress the importance of maintaining a certain level of federal funding to ensure CREOL remains a leading research institute.

•Reauthorization of the bi-partisan America COMPETES Act (originally passed in 2007 and expired in December 2013) to ensure American competitiveness in the global marketplace, and adding language specifying photonics to reflect the industry’s critical role in the ongoing innovation of many other sectors.

•Establishment of a National Photonics Prototyping and Advance Manufacturing Facility within the Department of Defense’s manufacturing mandate, possibly through inclusion of language in the National Defense Authorization Act (NDAA); establishment of such a facility could produce critical defense applications for warfighters, as well as drive new generations of high-tech commercial applications such as a more secure Internet, enhance medical diagnostics, and portable sources of renewable energy.

“UCF’s CREOL has been instrumental in developing many new and innovative uses for photonics, many of which have much grander impact than have yet been considered,” said MJ Soileau, vice president for Research & Commercialization and the founding director of CREOL.  ”The USA must continue to lead in photonics research and innovation – which has demonstrated benefits for economic growth and national security.  Ongoing funding is really a necessity. Hopefully, the legislators agree.”

About NPI: The NPI is a collaborative, industry-driven campaign to advance photonics research and funding. Activities concentrate on five key areas: defense and national security, energy, healthcare, communications, and manufacturing.