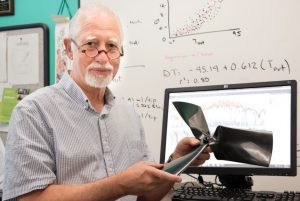 More than 30 years ago, a college professor mocked Danny Parker’s plans for graduate school. “I told him that I want to study energy use in houses,” Parker said, and the professor retorted, “That’s crazy! There’s no such degree. You got really strange ideas.” Undeterred by the insults, Parker pursued his goals. He obtained his master’s degree in environmental science and kept focusing on “those crazy ideas”: energy use in houses. Word got around the University of Montana about Parker’s research, and to his surprise, the Department of Natural Resources in Helena, Montana recruited him. “I was hired even before I was finished with my thesis defense,” he said.

Today, Parker is a principal research scientist at UCF’s Florida Solar Energy Center (FSEC). He has made numerous discoveries—the result of many building science and energy studies. He also holds 30 different patents aimed at energy efficiency in, of course, homes and buildings.

At FSEC, Parker specializes in researching and evaluating advanced residential energy efficiency technologies. He has tested and analyzed, for example, the impact of white roofing on residential cooling energy use, the impact of programmable thermostats, photovoltaics (PV) and solar energy sources optimized for buildings, and the potential of using energy-efficient lighting in residences. He is currently studying how air conditioners degrade over time. (For more information about building science see the Energy Efficiency in Your Home Matters.)

According to Parker, one of his projects ran for five years, monitoring 60 houses in various locations. “We studied them in great detail, all the way down to the televisions,” he said. From that study, Parker said that FSEC knows so much more about how energy is  consumed in houses than what’s been documented before. “We know more than the utilities know. We also know what makes a difference,” he said.

With such extensive knowledge, Parker said proudly, “I can give you a recipe for what to do to your house, and you’ll see your energy consumption go down by 40 percent, and if you add PV, you’ll be able to get it to zero.” He did say that some energy-saving changes are easy and inexpensive to do, but cutting energy consumption down to 40 percent requires some retrofitting to the house that may cost quite a bit more.

Recently, Parker shared his knowledge and thoughts in a 10-part series, What About Florida?, for CleanTechnica.com. The series provides tips on saving energy, the current energy use in Florida, and its future energy use. Parker also shares his perspective of what Florida can do about improving its energy efficiency as a state.

Of his many inventions, Parker’s most successful to date, has been a ceiling fan with novel twisted and slightly curved blades, similar to those of airplane propellers. Parker’s inspiration for the invention came from his father-in-law, a seasoned pilot. “He said, ‘I never flew an airplane with a flat propeller,’ and that got me thinking,” said Parker. Why do ceiling fans have flat blades? “Turns out, there’s no reason.”

The Gossamer Wind® series of ceiling fans that Parker and FSEC team members developed consume approximately half the energy used by conventional ceiling fans and are very quiet. UCF licensed the invention to King of Fans, which, according to FSEC, has sold nearly 2 million in the U.S. and saved users more than $40 million annually in energy costs. The fan is ready to be released in India, one of the biggest ceiling fan markets in the world, where it is licensed to Versa Drives Private Limited. Publication titled Development of a High Efficiency Ceiling Fan “The Gossamer Wind”  discusses the research behind the invention. 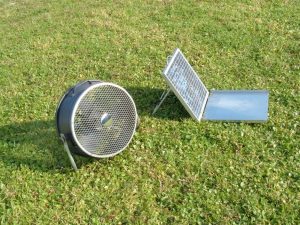 Using concepts from the ceiling fan invention, and his experience with photovoltaics, Parker developed the “Anywhere Fan,” a new solar-powered, portable fan. According to Parker, with the success of the Gossamer Wind® ceiling fan, King of Fans approached UCF about creating solar-powered attic vent fans. “We designed completely new blades for that, which worked much better than the previous stamped metal designs they had,” Parker said.

“I looked at the beautiful result of these–good flow, quiet and runs off a single PV panel,” said Parker. “I thought: why not use this to make a solar-powered fan that you can take anywhere?” That was the birth of the Anywhere Fan idea.

With an 18V motor and a 19V solar panel, the fan is quiet, lightweight and versatile. It provides personal cooling wherever it is needed, for example, at athletic events and picnics. “You can even use it to charge a standard 18V tool battery,” Parker said. “I think that the most compelling use would be for disaster relief,” Parker said. He noted how the fan could have helped the millions of people who were devastated by the recent hurricanes and storms that left them without power for weeks. For more technical details about the invention, see Solar-Powered Portable Fan Generates Greater Airflow while Saving Energy.

Looking back at his career, Parker attributes his success to careful observation, listening, and the willingness to learn from experiments and failure. “I love the experimental method—taking the data and trying to make sense of it,” Parker said. His advice to students and would-be inventors: “Be willing to fail and laugh about it when things don’t work.” He explained that getting unexpected results could bring more opportunity to learn about something still unknown or misunderstood. As an example, he said that after spending 200 hours developing the ceiling fan, the UCF team still could not get it to work. “That was really disappointing, but we learned something—the angle of attack was wrong. We had it too shallow.” Once they found the ideal angle, the blade performed perfectly.

More importantly, Parker said, “Find something that you feel passionate about—something you really love—whatever that is, and then do that. Don’t worry if others don’t like it or don’t believe you.”