Sudipta Seal and the Road to Entrepreneurship 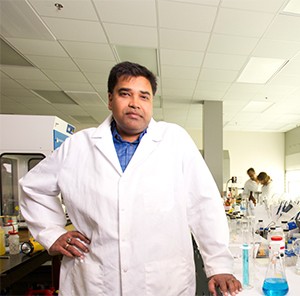 UCF researcher Sudipta Seal, Ph.D., has embraced the worlds of academia and industry, and his career is a testament to this successful amalgam. Currently, Seal is the Director of Advanced Materials Processing and Analysis Center (AMPAC) and NanoScience Technology Center (NSTC), the Interim Chair of the Materials Science & Engineering Department of the College of Engineering and Computer Science, and a Pegasus Professor and University Distinguished Professor.

Early in his career, Seal was challenged to find creative and innovative ways to find more resources for his work. He became involved in the fields of surface chemistry and nanotechnology, just when the field of nanotechnology was beginning to emerge. These explorations lead to two areas of specialization: nanomaterials and transforming waste products into green products.

The latter was fueled by a collaboration with legendary ceramics materials scientist, Larry Hench, Ph.D., and Zerocrete was born: a “green” cement substitute made from fly ash, the waste product from coal-fired power plants. Unlike conventional concrete methods, Zerocrete is made with very little energy and without creating any carbon emissions. This invention lead to the creation of the startup, nSolgel, which became a client of the UCF Business Incubator – Central Florida Research Park and was funded by Nanoholdings. The product received national attention when National Geographic wrote about the innovation in 2011, which lead to a National Science Foundation (NSF) grant to study the use of fly ash for oil spill cleanup. As a result, it was found that fly ash could safely absorb large amounts of oil.

Seal’s second startup is based on work that he started as an undergraduate student at the Indian Institute of Technology (IIT) in India, calling it an “accidental discovery.” Cerium oxide is a compound that is used as a coating on nuclear reactors. When Seal came to UCF, he decided to make it nano-sized: nanoceria (NC). While working with a biologist, he learned that NC had superb biological properties, leading to a National Institutes of Health (NIH) grant in 2004. Seal and his team have found more than 20 different biological applications, thanks to additional funding from many different funders, including the NSF, NIH, and the Department of Defense (DOD).

NanoCE was also created in the UCF Business Incubation Program. The goal of the company is to commercialize NC into biomedical applications. According to Seal, many of the patents have been issued to other companies. Currently, he is working with a group of eye scientists at the Oklahoma Eye Institute and another startup, Nantiox, based in Oklahoma City. NC has shown promise in aiding the prevention of blindness.

Although Seal’s startups have been successful, the journey to entrepreneurial success was not an easy one.

“Startups are very challenging and there’s always the ‘valley of death’ [the challenge of negative cash flow during the beginning stages of a startup]. Many times, we get stuck there. How do we get out of it? That’s where we need a lot of help. It’s not that the technology is bad or not worthwhile.”

Seal also guides his students into entrepreneurial spaces, including former student David Reid, Ph.D., who heads up Helicon Chemical Company. Founded in 2012, with the assistance of the UCF Business Incubator, Helicon has secured SBIR funding with their innovative work in nanoenergetics, by developing and manufacturing advanced fuels and propellants for aerospace and rocket applications.

By catching the nano wave just in time, Seal was able to not only find the resources he needed to fund his research, but he was also able to help others by commercializing his technology.

“Technology evolves. You have to ensure that you catch the wave of innovation on time, or you might miss it,” he remarked.

He has also found collaborating with industry to be mutually beneficial.

“While I solved their problems, I also fueled my passion for the research that I like to do, oxides and nanostructures, the materials that I invented,” he stated.

And he didn’t catch that innovative wave alone. Seal collaborates across various colleges at UCF, including the College of Medicine, the College of Engineering and Computer Science, and the Burnett School of Biomedical Sciences. He credited his funders which include NASA, NSF, DOD, NIH, as well as a local enterprise that Seal found to be extremely helpful—the Florida High Tech Corridor.

“Florida High Tech Corridor played a big role in my life because I could partner with the local industries to get matching funds,” Seal said.

“They are innovative. They’re thinkers. They have motivated faculty in their departments with all the activities of teaching and research, but also with entrepreneurial activities, like commercialization. They are providing platforms to have innovative ideas go out into the world—to become more successful and being compliant at the same time. Kudos to them—my big thanks to everyone there,” Seal said.

Sudipta Seal’s innovative ideas — combined with his collaborative research within UCF, with other academic institutions, and with industry partners — have allowed his work to impact people all across the world. To learn more about Seal’s research and about partnering with UCF, contact Andrea Adkins.