UCF Professor Shares His Experience with the Intersection of Information Systems, Healthcare Delivery, and Big Data 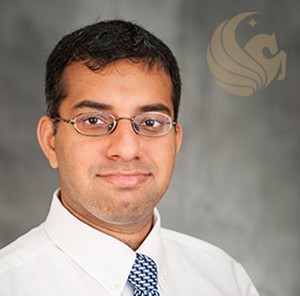 Varadraj “Raj” Gurupur, Ph.D., assistant professor in Health Management and Informatics in the College of Health and Public Affairs, grew up in India desiring to be an innovator. As a teenager, Gurupur was a voracious reader, learning about famous scientists such as Albert Einstein and Michael Faraday.

“I wanted to be someone who develops new things,” Gurupur said.

He wasn’t sure in what field he’d pursue as an innovator, but when it came time for him to go to college and choose a field of study, the turn of the millennium was a big deciding factor.

“I ended up choosing computer science because at that time that field was growing, during the late ‘90s in the Y2K era,” he reflected.

Gurupur received his undergraduate degree in computer science and engineering in 2002 from Manipal Institute of Technology, a highly ranked engineering school in India. He then came to the United States to the University of Alabama at Birmingham (UAB) where he received his Master of Science in Computer and Information Sciences in 2005 and his doctorate in Computer Engineering five years later. From there, Gurupur remained in the South taking assistant professor positions at Texas A&M University-Commerce, and later at Louisiana Tech University.

In the fall of 2014, Gurupur joined UCF. He shared what drew him here.

“It excites me that UCF is one of the fastest growing universities in the country and located in Orlando, Florida, which is one of the fastest growing cities in the country. UCF has a great potential for research because it has the College of Medicine, which is growing, and a reputable College of Engineering and Computer Science. So it’s a perfect rostrum from which healthcare informatics can grow.”

Within America’s Partnership University™, Gurupur has found support for collaboration through UCF’s Office of Research & Commercialization, stating that the office provides a great opportunity to faculty in finding collaborators.

“The office goes out and find collaborators not only from academia, but also from industry,” he said.

He stated that he has also greatly benefited from mentorship from Thomas Wan, Ph.D., Research Associate Dean at the College of Health and Public Affairs. This mentorship helped to create a collaboration and an affiliation with the Orlando VA Medical Center, the second largest in the country.

Gurupur is realizing his childhood dream of becoming an innovator. He is coming up with new ways to improve patient care by improving how healthcare providers handle patient data. One such improvement is called the Dementia and Delirium Analysis Research Tool, which is available for license from UCF. You can read about it in this month’s Patent Trending blog. For this project, Gurupur worked with Dr. Richard R. Selvaggi from Live Oak Medical Center in Commerce, Texas and Alexis Dewar, a doctoral student in the Psychology department at UCF.

Gurupur has also come up with a systemized way to monitor the data completeness of patient medical records.  He believes the Data Completeness Analysis Package (DCAP), can potentially bring a paradigm shift in improving patient data validity. This work was carried out in collaboration with Professor Xinliang Liu, Ph.D. and graduate student Ayan Nasir from UCF.

Through concept maps and statistical analytical methods, DCAP can holistically look at a patient’s record and can work across databases. Unlike currently available methods—which involve various forms (electronic or paper) or software that is proprietary and limited—DCAP is open-source and can be used with any existing databases. Gurupur hopes that this open-source software will continue to be improved by others.

With patient data management better optimized and organized, the ultimate goal is to positively impact both patient outcomes and revenues for healthcare providers. Incomplete patient health information can lead to misdiagnoses which can then correlate with increased length of stays at hospitals. Additionally, if a patient is readmitted to a hospital within a certain time period (usually between 30-60 days) of the initial visit for the same health issue, hospitals and healthcare providers must provide free services. This is inconvenient for the patient and costly for the provider. Gurpur is on a mission to change that.

With a heart and mind for innovation, Gurupur is tackling big data to improve the quality of life of patients. To learn more about the Dementia and Delirium Analysis Research Tool and the Data Completeness Analysis Package, contact John Miner.