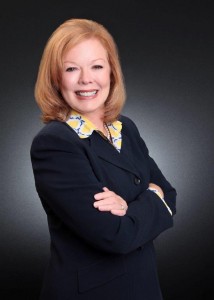 On July 26, 1990, President George H.W. Bush signed into law The Americans with Disabilities Act (ADA), a civil rights law that addresses the needs of people with disabilities. This landmark legislation prohibits discrimination in employment, public accommodations, public services, and telecommunications.

In light of this historic anniversary, we sat down with Barbara O’Hara, Health Sciences Operations Director at the College of Medicine, who has been issued two patents for a shelf that provides extra space in restrooms with disability access, for people to safely store their belongings while using the facilities.

O’Hara has always had the mind of an engineer, ever since she was a young girl.

“I was always interested in how things were put together and made. I remember there was shop class in middle school. I wanted to take that class because they were building and making things in there that looked like fun. But we had just moved into this particular part of South Florida and girls were not allowed to take shop,” O’Hara reflected.

Her shelf idea was birthed before the ADA was signed, through a tragic event.

“My husband’s cousin, Eddie, was riding a bicycle. He was 16 years old and he ran into the back of a parked truck and broke his neck. He was paralyzed from the neck down, which prevented him from fulfilling his dream of going to medical school. After that accident, Eddie and his family visited us from Oregon. Eddie was in a wheelchair and they were hoping to go to Disney World. It was very difficult for the whole family with four children, and one being in a wheelchair, to be able to enjoy everything. I remember when they visited our home, I had to remove some doors in order for him to get in and out of the bathroom. So he had no privacy when he visited us. That experience stuck with me,” O’Hara said.

Fast forward to the planning and construction of UCF’s Health Sciences Campus at Lake Nona, which O’Hara helped to create. O’Hara saw an opportunity to give people with disabilities some extra space in the restroom.

Usually, if someone comes into a restroom stall with items such as a cell phone, books, or laptop, there is nowhere to safely lay them. For example, if laid on a sink, a phone can slide into the basin and set off the faucet motion sensors. Laying items on the floor is not sanitary and usually too difficult for those with disabilities to pick up. The corner away from the toilet and sink was the one space that could hold this shelf.

O’Hara drew sketches of the shelf, which is wide and deep enough to hold a laptop or a purse and can hold up to 50 pounds. She then collaborated with a cabinet maker to create a prototype.

Although this was her idea, O’Hara sees her invention as a group effort. She credits the College of Medicine for giving her the space and freedom to be creative, as well as Brion Berman from the Office of Technology Transfer for his guidance and support through the IP protection process. You can currently find this shelf in all bathrooms that provide access for people with disabilities in the College of Medicine.

O’Hara hopes to see this shelf used in airport restrooms and beyond. She also has other inventions that she is working on that will help give more access and accommodation to people with disabilities. In the last year, she has submitted three new disclosures to the Office of Technology Transfer for these new ideas.

If you would like more information on the hanging corner shelf, contact Brion Berman in the Office of Technology Transfer.