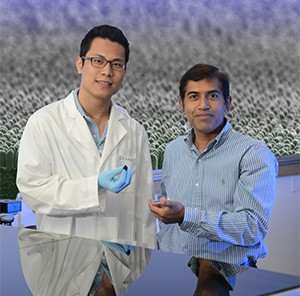 UCF faculty member Jayan Thomas, Ph.D. spied some stray cables lying about when he went for a walk one evening to ponder the subject of energy storage. With a “charge” of inspiration, a novel thought occurred to him: Cables transmit energy, so why couldn’t they also store it?

That insight has led to research that is not only gaining the attention of other prominent researchers and media throughout the world, but also brought Thomas recognition as a finalist for the prestigious 2014 World Technology Network Awards.

“My focus is to develop a portable, self-sustainable energy source that can be used anytime, anywhere,” said Thomas, associate professor, NanoScience Technology Center, CREOL, and College of Engineering and Computer Science. “It’s an honor to be recognized for this work and really speaks volumes as to the importance of this research and the support it receives from UCF’s innovation and entrepreneurship programs.”

A finalist in the energy category along with Elon Musk, SpaceX founder and Tesla Motors CEO, Thomas was among a prestigious collection of thinkers and innovators. The award celebration, which took place this past November, also featured award categories including biotechnology, law, media and journalism, policy, space, and the environment.

An important emphasis of the awards is serendipity—award nominees should have experienced coincidental and fortuitous discoveries during the course of their work. This dovetails well with Thomas’s chancing upon the cables while he was out walking.

The UCF researcher said he snapped into action after getting his idea that evening. “The next day I discussed this idea with my research student, Zenan Yu and directed him to work on developing such a device, and it took us about several months to develop and characterize them completely,” he wrote in his response to a series of questions that were part of the awards process.

The technology has a great deal of potential for practical use. Cables that store and transmit energy have applications in aerospace, heavy machinery, and electric automobiles, he explained.

Thomas and his team have been working closely with several of UCF’s programs—including the Business Incubation Program, Office of Research & Commercialization, and Office of Technology Transfer—to help transition his research to prototypes and then products.

“Energy storage, consumption, and conservation are incredibly important issues and communities, organizations, and nations throughout the world understand this,” said Thomas. “Receiving recognition from such a well-respected organization as the World Technology Network helps to shine light on the innovative research in this area being conducted at UCF.”

He added that this level of attention can also help in attracting new students to the program who want to be a part of groundbreaking, energy research.

No stranger to awards, Thomas has won the National Science Foundation CAREER award in 2014, the University of Central Florida’s 2014 Excellence in Research award, and the VEECO award for Best Nanotechnology Innovation in 2010.

Thomas’ work gained notoriety in recent years when he helped develop nanocluster technology that diffuses laser light, preventing pilots from being blinded by lasers on the ground. He said he remains steadfast in his commitment to bringing “a self-sustainable, renewable energy source to the most remote corner of the earth.”