Professor Zenghu Chang, from the Department of Physics and the College of Optics and Photonics, is leading a team comprised of researchers from theUniversity of Ottawa, (Professor Paul Corkum) and the University of California, Berkeley, (Professors Steve Leone and Dan Neumark) to help the federal agency better understand the interaction of electrons in solids and, ultimately, create ultrafast sensors and detectors. 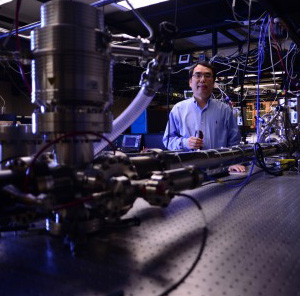 Chang said the funding builds from the 67-attosecond pulse of extreme ultraviolet laser light that his team at UCF generated last summer. That find gives scientists a new tool to view quantum mechanics in action – comparable to timing a flash on a camera to see some of the fastest electronic processes on Earth.

DARPA PULSE (Program in Ultrafast Laser Science and Engineering) is interested in going a step farther – investigating whether attosecond pulses of laser light can be applied to something like building electronic devices with ultimate speed.

“There have been a lot of new discoveries made in attosecond lasers in the last 12 years,” Chang said. “Now an opportunity has arrived to do something that has previously only been done in principle.”

Attosecond laser pulses can help scientists understand how energy can be harnessed to transport data or build stronger and more conductive materials. However, the intensity of the previous attosecond light was too low for many applications. Consequently, a strong femtosecond laser has to work together with an attosecond pulse in experiments. The new attosecond light source to be built will be strong enough to both excite and probe electron dynamics, which is considered to be the Holy Grail of attosecond science.

The first stage of the project will focus in building a new femtosecond laser capable of producing higher energy, pulses to drive the process of attosecond pulse generation. The laser will be housed in a 2400 square-foot space comparable to four standard labs in UCF’s Physical Science building and still, the laser beam will have to be “folded” multiple times to achieve the power the DARPA project is seeking, Chang said.

Such a facility will help the U.S. compete more effectively with European countries that have thus far dominated the landscape for attosecond laser research infrastructure.

DARPA, which is responsible for developing cutting edge technologies for the military, has increasingly set its sights on the power and potential of ultrafast lasers. A study last year by the National Research Council titled Light for America’s Future emphasized the imperative role optics and photonics will play in developing the technologies of the future and strongly recommended that the U.S. pursue becoming a global leader in the field.

UCF is buttressing its strength in the area as well and has recently announced the creation of an Institute for the Frontier of Attosecond Science and Technology (FAST) directed by Professor Chang to allow researchers from the Department of Physics and UCF’s College of Optics & Photonics/Center for Research and Education in Optics and Lasers to work closely together to compete for cutting-edge projects such as the DARPA grant.

“Attosecond science is addressing problems that are more and more complex,” said Chang. “By establishing an institute for collaborative research on attosecond science we create the potential for major breakthroughs in our understanding of the role of ultrafast electron dynamics.”

CONTACT: Barbara Abney, Office of Research and Commercialization, 407-823-5139 or barb.abney@ucf.edu