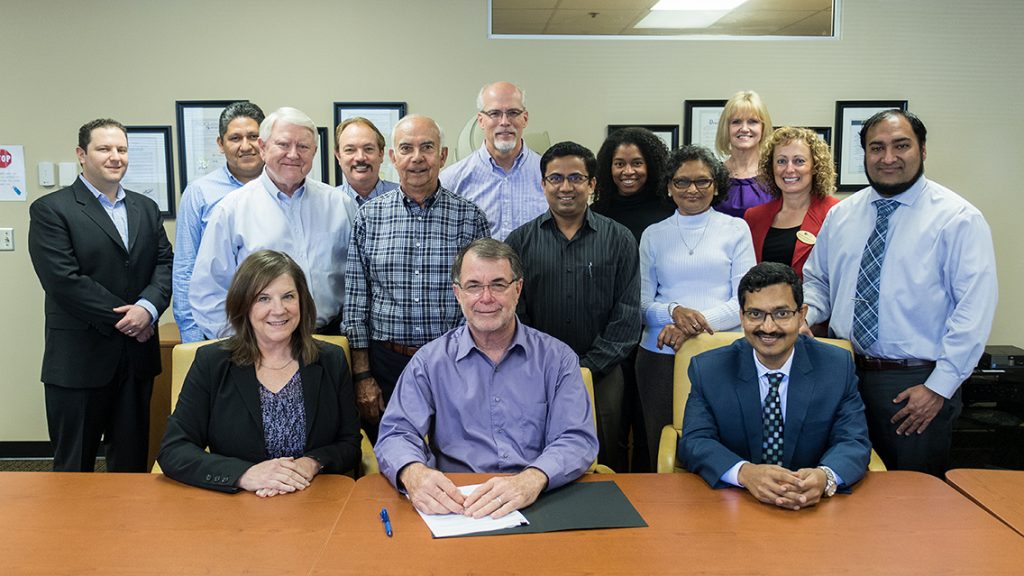 An international agricultural company has licensed a formula for fighting crop disease that a UCF scientist spent more than five years perfecting.

Gowan Co. recently signed an agreement with the University of Central Florida to obtain exclusive rights to the anti-fungal and anti-bacterial formulation developed by researcher Swadeshmukul Santra. The formulation couples a centuries-old agricultural practice with cutting edge nanoscience. Gowan plans to market it for use on a wide range of fruits and vegetables, including citrus, potatoes, tomatoes, watermelons, berries and more.

“We are very excited to partner with UCF on this innovative new product as it will enhance the fungicide/bactericide portfolio that we are able to offer our global customers,” said Gowan Co. chief operating officer Jacque Palmer. “It’s an excellent opportunity for us to use our expertise in bringing critical technologies such as this to market to help growers protect their crops.”

It’s common for the private sector to license technology invented by UCF researchers. But this agreement represents the first time a UCF discovery has been licensed for the agricultural industry.

“In my opinion, this is groundbreaking,” said Andrea Adkins, assistant director of UCF’s Office of Research and & Commercialization. “It’s the forerunner of everything coming from UCF in agriculture.”

Santra, an associate professor with joint appointments in UCF’s NanoScience Technology Center and Department of Chemistry, began working on the formula in 2011. Through trial and error, Santra and his research team developed more than two dozen formulations before finding the right one – known internally as SG-25, for the 25th formula from the “Santra Group.”

“There were a lot of challenges for us to develop this product,” Santra said. “It takes time.”

It relies on an age-old treatment: Copper, which was first used in agriculture in 1761 for treating seeds to protect from soil-borne fungal attack. Since then, copper compounds have been a staple in preventing crop disease.

But this isn’t your grandmother’s copper. Santra developed copper nanoparticles about 100,000 times smaller than the width of a human hair, and embedded those tiny particles in a silica matrix. Field trials have shown the new formulation is more effective at preventing disease than the industry standard. And it’s safer for the environment, Santra said.

When growers apply copper compounds to their crops, it can build up in the soil over time. Too much copper limits the ability of plants to take in other nutrients, and at high levels can be toxic to aquatic species – reasons why the U.S. Environmental Protection Agency regulates its agricultural use. And over time, bacteria can develop resistance.

Nanoparticles have much greater surface area than copper in its normal state, so they’re more effective at lower levels.

“My goal was to stick to copper – which has been the gold standard for centuries – but to redesign it to improve its effectiveness, minimize the development of antimicrobial resistance and cut down the amount of copper we apply in agricultural fields,” Santra said.

The Gowan Co. first learned of Santra’s work in 2011 when one of his close collaborators, Jim Graham of the University of Florida Citrus Research and Education Center, presented findings from field trials of Santra’s work to Florida growers. A Gowan representative was in the audience and later connected with Santra.

The Citrus Research and Development Foundation helped fund some of Santra’s research. Santra and his graduate students have been working with Gowan to develop the formula through several years of tests.

“It was a great learning experience for me,” said graduate student Mikaeel Young, who has worked closely with Gowan on the project.

Under terms of the licensing agreement, Gowan will now work to obtain regulatory approval from the EPA and at the state level. That process can take two years or more.

Through the work of UCF’s Office of Research & Commercialization, the agreement will bring royalties from future sales to the university and its inventors.

This is Santra’s first agriculture-related development, but others are in the works and already undergoing field trials. Last year, UCF established the MISA Center of Excellence – which stands for Materials Innovation for Sustainable Agriculture – with the goal of combating crop disease and feeding the world’s growing population. Santra is director of the center.

This story was also covered on mynews13.com 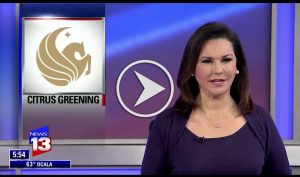