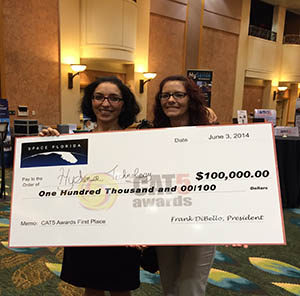 A University of Central Florida spin-out company received the $100,000 first-place award at the CAT5 innovation competition at Innovation Concourse of the Southeast Safety and Manufacturing Event in Orlando.

HySense Technology, founded by UCF Florida Solar Energy Center researcher Nahid Mohajeri, produces and markets an intelligent tape that changes color in the presence of hydrogen and other gases.

“This is real validation, just the fact that people, the judges, believe in us,” Mohajeri said.

HySense is marketing a specialty beige tape that turns black when hydrogen is detected. It can be wrapped around or attached to surfaces where gas might leak. Mohajeri has five customers so far, and is aiming for $90,000 total revenue this year.

“To have an awards program like this in Central Florida is huge,” Mohajeri added. “As scientists, we are very much aware that low wages are in issue in the region. But these awards can bring more high-paying jobs here. When people see that we have this level of support that makes a difference.”

The CAT5 competition is hosted by Space Florida and UCF. It showcases tech companies in the Southeast region and attracts venture funding for entrepreneurs.

“The CAT5 awards support the idea that technology businesses are a key component to the enhancement of Florida’s future innovation and economic growth.” said Tom O’Neal, associate vice president of research & commercialization at UCF. “HySense is a clear example of such as success story.”