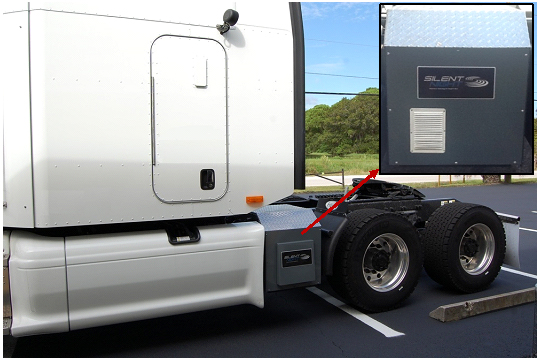 Starting as a sketch on a restaurant napkin years ago, a patented device to convert energy from magnetic force and reduce fossil fuel use in large trucks is now in production. The device is poised to solve issues facing the trucking industry due to anti-idling laws and zero-emissions laws, enacted in nearly every state over the past few years.

The spread of these laws reduce greenhouse gas pollution from heavy diesel truck engines, but require an auxiliary power unit (APU) to run small “hotel” amenities for drivers, such as air conditioning and heating, during mandatory rest time for safety on the road.

The industry has relied on diesel power units as a stop-gap in the face of stricter regulations, but these units posed problems including loud noise and the cost of diesel fuel, passed on to consumers in higher prices for shipped goods and an environmental toll.

Clean energy from the new power unit, the Silent Night, comes from the interaction of permanent magnets and electro-magnets. Advanced algorithms convert stored energy into rotational force to produce electricity.

Founders of Florida-based Maglev Energy developed the power unit from an initial prototype, built from a home generator bought at a Lowe’s home improvement store, to international recognition through a partnership with the University of Central Florida. A team of researchers and graduate students at UCF recently presented their findings at an international symposium in Marseille, France.

The development was funded in-part by a grant from the Florida High Tech Corridor Council. Anticipated commercial success of the Silent Night APU stems from the motor’s efficient magnets that degrade less than 1% every 100 years. With nearly zero maintenance and no need for diesel fuel, a 6,000 truck fleet using the UCF and Maglev jointly developed Silent Night will expect to save approximately $2 million per year, reducing costs of shipped goods and minimizing fossil fuel emissions.

Other applications using this technology are under development.

For more information on Maglev: http://maglev-energy.com/