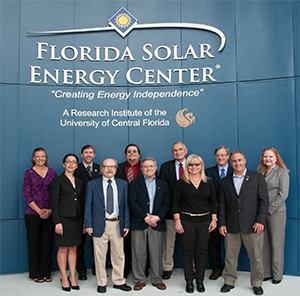 Technology that was developed as a result of a partnership between the University of Central Florida and NASA and commercialized by a University startup company has just been internationally recognized as one of the most technologically significant products to enter the marketplace last year by the R&D 100 Awards.

When NASA John F. Kennedy Space Center needed an easy-to-use, safe, effective, and non-powered solution to visually detect dangerous hydrogen leaks on and near the shuttle launch pad, they reached out to Ali Raissi and his team of researchers at UCF’s Florida Solar Energy Center. Together, NASA KSC and FSEC designed a one-of-a-kind, tape-like solution that selectively changes color in the presence of hydrogen gas. Since hydrogen gas is odorless and colorless, visual detection means that the leak source can now be quickly pinpointed for repair. The advanced safety solution, known as Intellipigment™, was made available to the commercial market last year through HySense Technology – a company founded by one of the UCF technology developers.

HySense founder, Nahid Mohajeri, has worked with UCF’s Office of Technology Transfer and Venture Accelerator to start and grow the company. She was the recent recipient of the CAT 5 grand prize of $100K, sponsored by Space Florida, for the innovative technology and commercial plans on bringing the technology to market. The Technology Transfer team worked with HySense and NASA KSC to submit the award application.

The recognition from the R&D 100 Awards validates the great things that can come from partnerships, collaboration, and ingenuity. The banquet and award presentation will be held at the Bellagio in Las Vegas, Nevada on November 7th.