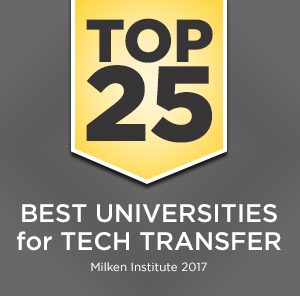 The University of Central Florida ranks 22nd in the country for its success in “technology transfer” – the practice of developing academic research into new technologies, products and companies, according to a report released Thursday.

The report’s authors ranked each university based on four indicators of technology transfer success: patents, licenses executed, licensing income and start-ups formed, relative to research expenditures. UCF ranked particularly high for the number of patents granted  – fifth out of 225.

In fiscal year 2016, UCF had 90 patents issued, 34 licenses and options executed and $1.8 million in license income.

“Universities, with their talented faculty, staff and students, have the power to produce research with impact,” said Elizabeth Klonoff, UCF’s vice president for research and dean of the College of Graduate Studies. “This ranking illustrates that we are creating innovation that not only elevates the pursuit of knowledge, but also solves real-world problems. We are proud to be able to deliver on a central part of our mission and will continue to seek opportunities to make a collective impact.”

UCF, UF and USF are keenly focused on tech transfer. The three research universities are partners in the Florida High Tech Corridor Council, an economic development initiative to foster high-tech industry and innovation through partnerships that support research, marketing, workforce and entrepreneurship.

The report “Concept to Commercialization: The Best Universities for Technology Transfer” also carries with it a clear policy recommendation: American research universities are among the nation’s most powerful engines for domestic economic growth, and funding to sustain their research brings strong returns in the form of new industries, businesses and jobs.

“American economic vitality is fueled by invention,” said Ross DeVol, chief research officer for The Milken Institute, who also authored the original 2006 study on the topic. “As a society, we understand our universities as the training ground for the next generation of leaders and doers, but we often overlook the benefits these institutions impart simply by bringing new ideas to life. Our study shows the impact of university research both locally and nationally is profound, and needs our support.”

The report found that university research funding supports the creation of both middle- and high-skill industry jobs through innovation, commercialization and technology transfer, with varied and significant multiplier effects.

A 2014 study of the economic impacts of UCF’s Business Incubation Program found that the incubator was responsible for facilitating the creation of more than 3,700 jobs in the region. Also, client and graduate companies have generated more than $2.5 billion in total economic output since the program’s inception in 1999.