UCF Renews its Partnership with Holochip

Orlando, FL (September 2012) – UCF renews its partnership with Holochip with a license for Variable-focus Liquid Lens patented technology developed by UCF researcher Dr. Ren Hongwen (holochip.com). The Technology Transfer team in the Office of Research and Commercialization at UCF worked to negotiate the license agreement with Holochip.

Established in 2005, Holochip is a market leader in adaptive lenses. Today, the company has a portfolio of over 20 issued patents protecting its adaptive lens technologies and has led the industry in pioneering tunable-focal length lens products. 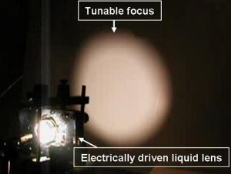 Orlando, FL (June 2007) – The University of Central Florida has signed a licensing agreement with Albuquerque, NM based Holochip Corp. for a portfolio of optical lens technologies developed by Dr. Shin-Tson Wu, provost-distinguished professor of optics, and his research team at UCF’s College of Optics and Photonics. This team has developed and patented technologies in the field of adaptive lenses some of which closely replicate the working of the human eye.

Adding the patented technology to their capabilities will enable Holochip to manufacture zoom lenses, such as those used in digital cameras and camera phones, at a dramatically smaller size without compromising clarity. Holochip Corp. then supplies these specialized lenses to manufacturers of camera phones, digital still cameras, medical and military equipment and other products. Under the agreement with the UCF Research Foundation, Holochip gains exclusive worldwide rights to Wu’s adaptive lens patents, including five U.S. patents and numerous foreign applications.

Holochip was founded to realize the commercial opportunity in the emergence of affordable, durable, and high-quality variable-focus lenses which signifies a new and sustainable photonics market segment – the adaptive lens – born at the crossroads of traditional lenses and adaptive optics.

Conventional zoom lenses rely on mechanically moving groups of glass or plastic lenses in order to adjust focus, magnification and field of view. Adaptive lenses, however, offer the ability to change focal lengths while eliminating the need to mechanically change the location of the lens. Wu, who joined UCF in 2001 after 18 years at Hughes Research Laboratories, is known for his advances in the fields of liquid crystal displays (LCDs) and liquid-crystal (LC) optics. Wu was one of the first researchers to recognize the need for adaptive lenses, and he has directed research that resulted in two distinct approaches.

The first, LC lenses, is based on the ability of liquid-crystal materials to alter their refractive index in the presence of an external electric field. With the appropriate selection of LC materials, substrates and device architecture, lenses can be created that adjust their focal length upon an applied voltage. The second approach, fluidic lenses, was inspired by principles of the human eye. The lens comprises a transparent optical fluid that is encapsulated within a flexible lens membrane and substrate. Upon compression of the lens body, the shape of the flexible lens membrane is modified, which results in an adjustment of the focal length of the lens. Since this approach provides a wide range of focal power with almost no optical loss, it can be implemented in compact camera modules, making it attractive for size-limited applications such as digital cameras and cell phones. Likewise, the LC lens offers the ability to control high-order aberrations that can lead to blurriness, making it attractive in applications such as free-space optical communications, adaptive optics, corrective eyewear and cameras.

“This technology represents years of effort from Professor Wu and his research group at UCF,” said Joe Giampapa, UCF’s Technology Transfer Director. “We are very pleased to take the science to the next level in the commercial development by partnering with Holochip. We believe that Professor Wu’s research, together with Holochip’s aggressive commercialization strategy and manufacturing capabilities, has the potential to create a major impact on camera phones and numerous other optical products and industries.”

“With the explosive growth of mobile imaging, and camera phone sales approaching one billion units worldwide, there is a critical need for high-quality, inexpensive and environmentally responsible adaptive lens solutions,” said Robert Batchko, CEO of Holochip Corp. “With this agreement and our relationship with Professor Wu and his team, Holochip has taken a significant step toward meeting this need.” Holochip Corp., a manufacturer of adaptive lenses, recently announced its flagship product, an adaptive polymer singlet lens, at the Conference on Lasers and Electro-optics (CLEO-2007) in Baltimore, Md. The company is privately held and was founded in 2004 with financial backing from ITU Ventures, the New Mexico Angels and others.